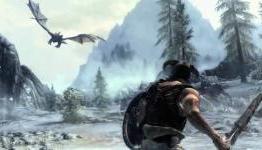 BT: While traversing the snow-covered landscape of Skyrim, a thought began to surface in my mind as my Breton Conjuror was climbing the Throat of the World. It was at first a creeping, discontenting feeling that I tried to shrug away. But after killing my fifth dragon with relative ease, these dark thoughts grew stronger. It was only a matter of time until I realized a cold, hard fact about The Elder Scrolls V: Skyrim. The game is no where near as good as everyone says.

And I know those reading this now are more than likely sharpening their glass daggers and donning some daedric armor to partake in a witch-hunt against me. While the computer screen your reading this on can protect me from vicious physical attacks, let me preface the above comment with the following, Skyrim is a damn good game and deserves praise for the type of game it is, a free-roaming RPG that allows players to fulfill their inner desires of being the hero. It is impressive in it’s atmosphere, fantastic in it’s sound design, and is still one of the best games of the year.

But it’s not that good, I am sorry to say. The biggest problems I have with Skyrim can be summed up into five general grievances.

this is very unprofessional, and comes off as a whiny rant.

I feel dumber after reading that.
(Edit) The Article, not the comment

honestly, i gave a look to see if they might list anything i might legitimately agree with. they didn't, so i'm glad i didn't waste my time actually reading it

no serious gripes from me. although i can't help but imagine how seriously epic the game would look if the character models during the loading screens were all in-game O.O

The article is too wordy and could have been summed up much more quickly..... But there is some good points.

To make it easier. Here is the summery quick.

1. Interface - too complicated and a pain during combat even with favorites.

3. Races - Carry less weight and are too balanced.

4. I lost interest in this one, sorry.

5. Game Choices - lacks emotion and completion reward. In the end the choices do not matter.

I've seen way too many of these "why I don't like *insert hugely popular title*" articles. They're just fishing for hits with flamebait. How about writing about a game you absolutely adore rather than picking holes in popular things just to get people's attention?

and "preface the above" doesn't make sense

Another internet genius telling us why their opinion is clearly the only correct one? Sweet.

The conflict between the Imperials and Stormcloaks has a very poor resolution with almost no commentary by the npcs around the world after you defeat either Tulius or Ulfric. It is very poorly done IMO