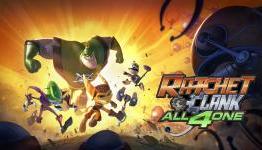 GamrReview - Ratchet and Clank: all 4 One

GamrReview: "Back in the PS2 era, Insomniac games launched the Ratchet and Clank series with a trio of remarkably well received games that started with the original and concluded with the humorously titled Up Your Arsenal. They followed this up with what could be seen as a side-project game called Ratchet: Deadlocked, a title which focused almost entirely on the series' co-op features and was received less favorably than the trio that preceded it. Sadly, it looks like Ratchet and Clank: All 4 One repeats this pattern on the PS3, following up three well-received games with a lesser sequel that focuses on cooperative play."

PS3 Ratchet and Clank: All 4 One gamrreview.vgchartz.com
Read Full Story >>

Adhttps://www.youtube.com/watch?v=EjfojxXOobE&t=463s
- Comments (7)+ Comments (7)
TopNewestOldest
The story is too old to be commented.

Interesting review, but the game still seems flawed to me. R&C works better in its traditional form, in my opinion.

I actually agree, but it's still pretty fun

Co-op runied this game just as it ruined Residnet Evil 5.

Why did they do Co-op in the first place...a spin off I understand but in the main series. When you have a formular everyone likes you don't change it to something which seems out of place.

I fully understand what your saying but nobody was starting to moan on that it was getting stale and I'm sure they could of found a better way then tacking on co-op to please single player gamers, which lets admit are the main audience of R&C

only way the industry will evolve :) other wise series stays the same and the games stay the same... i dont want that for another 20 years xD

all insomniac had to do was make it a 2 player co-opt
use CLANK or RATCHET only!! sometimes I wish I could use clank while my buddy play as ratchet.

A solid review, and the game looks pretty nice! Too bad they didn't take more time to refine it, get the bugs out and stuff! I might give this one a try 'though! ^^

Super disappointing as an R&C fan...

The Evolution of Ratchet & Clank, From 2002 to Now

Ratchet and Clank Into The Nexus — Swan Song or Call To Arms?

5 Reasons Why You Should Play The Ratchet & Clank Series