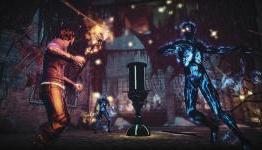 PixelJumpers: Shadows of the Damned Review

"However, don’t be turned off by Shadows of the Damned’s crudeness, lack of polish, or its crass story (which takes a surprisingly poignant turn at the very end). When it’s all said and done, Shadows of the Damned ends up exactly like what you would expect a game from Suda 51, Shinji Mikami, and Akira Yamaoka to be. Its humor is offbeat and hilarious, its gameplay is tight and fun, and the music is catchy, eery and unsettling all at the same time. This is by far one of the most unique games you’ll play this year, and you’re doing yourself a huge disservice if you don’t at least check it out." Jake Weston, Associate Editor

pixeljumpers.com
- Comments (1)+ Comments (1)
TopNewestOldest
The story is too old to be commented.

Good game to play in October.

Suda51 Reclaims Rights of Shadows of The Damned

Looking back to 2011 and Shadows of the Damned’s Hotboner

Watch Suda51 Chat With Us About No More Heroes, a Killer7 Director's Cut, and More