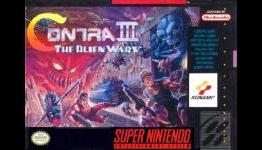 Here it is. The grandaddy (well, the grandson of the grandaddy) of insanely hard games. Super Probotector: Alien Rebels, or Contra III: The Alien Wars as it’s known to the majority of you. Unfortunately, I’m lumbered with the inferior PAL version that switches the bad ass, machine gun-wielding dudes Jimbo and Sully for two lame robots. How it sucks to be European at times.

Anyone who has played Contra III will know why it’s featured here in Tough as Nails. To put it bluntly, it’s a rather sadistic affair. In fact, all the Contra games are pretty evil when it comes to the difficulty setting. Whichever programmer at Konami thought it would be funny to label the lowest difficulty setting as “easy” should be taken out back and whipped repeatedly. This game is cruel. Contra III is more than just a game, it’s a life lesson. And the lesson is that you will always die in the end. Over and over again.

One of my favorite SNES titles!

I remember playing this game and my younger bro wouldn't shut up and i kept dying so i turn around and sock him so he would shut up cuz i was in rage mode after that day i was never allowed to touch it xDD.

Back in the days there is a lvl where you climb and enemies just re-spawn from sides and i just put something heavy on the trigger button and let the game like this for 1-2 hours until i have made 30 lives to finish this super hard game.

Cartridge Blowers Ep. #85-Sonic and Knuckles F**k a Guy Up