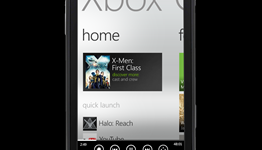 Earlier today you probably spotted the big, big news from our pals over on the Xbox team. They’re bringing a new world of entertainment to your living room and making it faster, funner (yes, that’s right, funner) and easier to find. If you haven’t seen it already, I highly recommend checking out the killer video that shows all of the new things that will be possible with an Xbox 360, Xbox LIVE and Kinect in your living room.

Watch that video closely and you’ll notice that around the 1 minute mark, the girl in the striped shirt pulls out a Windows Phone and starts to search for content that magically appears on her Xbox. What she’s using is the insanely awesome (but still not quite available) Xbox Companion App. The app, which will be completely free for Windows Phone users, is an amazing little tool that will let you Find, Learn more about and Control content from Xbox LIVE Marketplace on your Xbox 360.

Here is a working link (for me):

Hopefully, this means I can schedule DVR stuff from Windows Phone 7 on my Xbox 360.

I will be using this

Looking forward to the windows phone.

Every Hitman Game, Ranked From Worst To Best

15 Best Wrestling Games of All Time