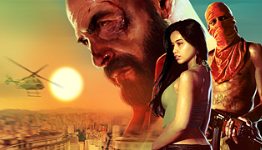 Why Did Max Payne Go to Brazil?

"Aside from an unfortunate big screen adaptation, Max Payne's been away from the spotlight for a long time. After Max Payne 2 was released back in 2003, franchise creator Remedy Entertainment moved on to make Alan Wake. Rockstar took over development for Max Payne 3, and recently distributed a gameplay trailer as well as revealed what sounds like a final release date. The footage shows Max running around Sao Paulo years after the events of Max Payne 2, and on the surface appears to be a different take on the franchise. No trenchcoats? No rain-soaked, nighttime New York City? Is this really still a Max Payne game? Rob Nelson, the art director at Rockstar Games answered some of our questions.

Rob Nelson: There's a break of several years between the events of Max Payne 2 and Max Payne 3, and Max spent a great...

He went for the hot women.

Quentes actually won't mean much around here but temperature, try gostosa ("tasty"), but it can also be considered depreciative, if you want to keep the level high and avoid some slaps to the face, a simply "you are really beautiful" (você é muito bonita) probably will get you better results.

'He went for the hot women.'

This. They are the sex. Honestly, and the accent? My God. I also have a thing for Spanish women though, so maybe I just like Latino women?

I wanted to reply 'Big wet ass' but I should have realised someone would post an earlier typical reaction to the word Brazil.

Brazilian nuts. Except over there they call them. . .nuts.

Nop, we call them Castanhas do Pará.

Because that's where the next World Cup and Olympics are.

for the coffe :D

There is no Lambada in brazil....

Actually there's Lambada here, but everyone hates it, so you probably not going to listen it anywhere but in some specific dance clubs.

A series of Skol (a brand of beer) advertises made fun of the situation many times, portraiting a guy coming to a barbecue party dressed like a nutcase, dancing lambada and bringing the singer Beto Barbosa with him, which everyone hates, but the beer he brought made it all right.

To get his black belt in BJJ under the Gracies.

To get to the other side?

Because they already were working on it before people started to point out that it was nothing like Max Payne, thus leading to a massive gap of silence from them. They then decided to wrap the game up anyway since they were so far in knowing people will buy it anyway because it's Rockstar.

GTA Needs A Game Set In Its Homeland – Europe

We All Miss The Old Rockstar