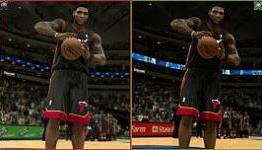 Lens of Truth writes - "Welcome back for another exciting Head2Head! This week the demo for NBA 2K12 on the PlayStation 3 and Xbox 360 go mano a mano to see which version of this stellar Basketball game is the favorite to win this years NBA gaming crown. Lace up your Nikes, pump up your Reeboks and jump on in to our latest Head2Head!"

EA really needs to step up their game when it comes to sports titles. I don't why they favor the 360 so much.

Regardless, sports games are boring as hell.

I cannot wait to play 2k12. I've played 2k10 all year long and 2k11 all year long. This game is my addiction! The team-up mode is so addicting and it was broken. Imagine if they fixed that mode I would probably drop out of school and lose what's left of my social life!

EA favors the 360? Since when? They even intentionally made BF3 look worse on the 360 in favor of PS3.

Both of you are trolls so i shouldn't say anything but EA far from favors the 360. Maybe its because 2K has the best basketball game around since at least '08

You know nothing about sports video games. EA does not make this game.

This is by 2k Sports and is the gamescom build. This is no where near final representation of the game. I know that's said alot, but people who've played the actual game and the demo say a lot of problems from the demo aren't in the full game.

I thought this game was made by 2K??

Most EA published games look as good or better on PS3 lately.

Easy 360 win. It seems likes every multiplatform sports game looks better on the 360. These devs need to step it up and not use the same exact engine for their yearly rehashes.

well its sad to see not fair games like this but i'm not going to buy this game anyway i just wish they make them both the same next time so everybody can enjoy the full experience.

The only major difference i see is the AA implementation. QAA for ps3 and MSAA for 360. QAA of course contributing to the blurrier image. First page 9th picture the lights in the PS3 version also seems to have a stronger bloom effect.

I don't know if its qaa, msaa, lighting or what ever. It just looks better on the 360. Now if you have a PS3 only, should that stop you from buying the game? That depends on what is more important to you: the gameplay or the graphics.

When you play this game on PS3 you will not be able to see the 360 version. So unless the console war is that serious to you, I don't see it being a real problem. I can see that that is Labron, and I can see the HP logo in the background. It may not be a clear as the 360 shot, but looks good enough to play.

wow pretty clear 360 has the better looking one.

Seems more background detail on the stadium for 360.

90% of the games I play are multiplat games. Look to PS3 exclusives for the better looking games.

Except for 360 crushing black detail as usual, 360 wins this one.

The only differences I see is PS3 is more brighter then the XBox 360 and the ad's change on the sideline thats all.

The 360s colors are more lush.

how anyone can think the PS3 version looks better i dont know lol.

they look the same (apart from the usual lighting differences) but the PS3 version absolutely destroys the image quality with the horrible Quincunx AA vaseline smear effect.

Agree 1Disagree 0
▼✖-+
SPAMInappropriate
Show all comments (21)
The story is too old to be commented.
40°