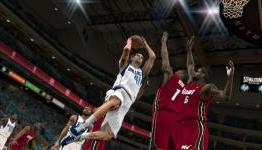 The NBA 2K series has been around for awhile now, and has always enjoyed some level of success. That being the case, most people assumed that NBA 2k11 would follow suit and be a solid if not ultimately forgettable balling experience. Then the game came out and fans and critics alike were blown away. The game featured some of the tightest controls basketball games have ever seen, impressive graphics and animations, and a new mode that let gamers play through the career of The Airness himself, Michael Jordan. The game pulled in more than a handful of sports-game-of-the-year awards, and won itself a large and well-deserved fan base. Despite this, 2K Sports and developer Visual Concepts aren’t content to simply ride the high from last year and hope that the game will sell itself. Instead, the talented folks behind the series are looking to push the envelope even further, and steal their previous game’s title of “Best Sports Game Ever.”

hookedgamers.com
- Comments (2)+ Comments (2)
TopNewestOldest
The story is too old to be commented.

Only sports game that should be nominated for GOTY. The amount of stuff they added is mindboggling. Especially since they only have like 8 month dev times

@ below, aren't you on the 2K forums? I swear I've seen that name before