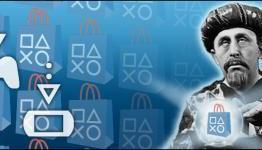 Want to know what is coming to the PlayStation Store this week? Find out in PSLS' weekly PlayStation Store Preview, complete with confirmed content, as well as a look into the future in their coming soon section.

Altered Beasts, easily one of the best Sega games ever!

Oh wow! It's nice to see that coming back.

Wise from your gwave!

altered beast was garbage. the fact you think its one of the best sega game ever makes you look like a TWAT.

and your getting flustered over altered beast and not mega man lol.

You're the one who's getting flustered little boy.

You've got some nerve.

Mega Man was released over here already, it's just a PSOne port of an NES game. I'd rather play Altered Beast again because, honestly, I think I've reached my limit on Mega Man (one of the most pimped-out franchises in gaming history without adding much new to any incarnation).

to each his own, i don't like Mega Man much at all. But i guess i am a TWAT because I enjoy Altered Beast.. oh man, not a TWAT..

Dont know why but i definitely read "altered breasts"

Blood..I will have to get this and squeeze in some time for it between Dead Island..

Why is there still no release date for the LBP2 move pack? It's supposed to come out this month. I can't wait.

It was 2 weeks from now

i wonder how that blood rain game is going to be

The bloodrayne game was reviewed in the October issue of playstation the official magazine and it got a 6/10. They say the controls are better suited for killing enemies than accurately jumping between objects. Hope that helps!!

thanks bro! was considering buying it but im not sure now. I'll check the demo out

Oh you know ima get my travis porter on

BloodRayne Betrayal Gets a September 9 Release Date on Switch, Console, and PC

Which of the Xbox Backwards Compatibility Super Sale bargains should you pick up?