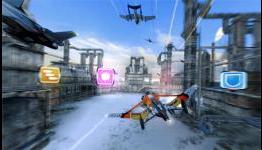 WingDamage.com writes, "How many airplane racing games can you think of off the top of your head? Any? Without resorting to Google, all I could come up with was one third of Diddy Kong Racing. This is exactly why I was instantly fascinated by Digital Reality’s SkyDrift. It’s in a sub-genre that’s rarely explored.

You could call it “Mario Kart in the sky”, but that really isn’t fair to the game. SkyDrift may be a weapons-based racer, but it’s far more deliberate and skill-based than any racing I’ve ever done in the Mushroom Kingdom. The fact that you need a second analogue stick to control your plane’s knife position is proof enough that the game is deeper than some of its contemporaries."

Adhttps://www.youtube.com/watch?v=IJUbGKExS0A
- Comments (0)+ Comments (0)
TopNewestOldest
The story is too old to be commented.
130°2

What Does a Digital Marketing Agency Do? Everything You Need To Know in 2022