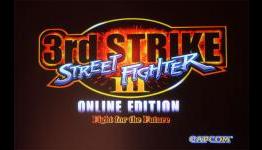 Giant Bomb: "It's certainly capable of playing a perfect-feeling game online. But it's probably important for you to know that Third Strike Online Edition is not going to magically turn a bad connection into a good one or anything like that.

As for the game itself, it's a more technical fighting game than most, with a parry system that puts a greater emphasis on timing. Third Strike also has plenty of things that carried right over into Street Fighter IV, like EX moves and using the two light attack buttons to throw. So if you played a lot of the SFIV series, plenty of those skills will carry over."

Decent but i would have prefered if they released SF: Alpha 3.

Both this and Alpha 3 are the best in the series!!!!! I think they gonna gonna bring Alpha 3 online next, I think they will, and hopefully Capcom vs SNK 2!!!!!

Why You Should Attend Combo Breaker

Top Tier: With music as our guiding light, part 3