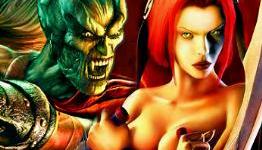 Joystick Division: Ever since sparkly heartthrobs became the next big thing, vampires have been bled dry in movies, television, books and games.

But that doesn't mean vampires weren't cool at one point, back when they would sooner rip your head off than let you climb on their back and go frolicking through the forest.

In memory of what vampires used to be, we present you with our favorite creatures of the night from video game history.

Lol at Vincent being on the list. I remember years ago there was a rumor that FFVII had a sidequest where you could prove Vincent was a vampire. A part of me is still disappointed that sidequest doesn't exist. :O

Also, Kain is amazing and I'm still waiting for a new LoK game...preferably one made by Amy Hennig. Fuck, I wish Sony/Naughty Dog would buy the rights to that series. Amy's the only one who could do a new game justice.

ALL HAIL DRACULA!
Seriously I loved him the first time I heard the cheesy voice acting,
But enough talk. HAVE AT YOU!

the entire legacy of kain games were amazing, of course that includes soul fuking reaver hehe

i totally loved darkwatch that was really fun

though i think alucard should be number 1

Although his image is used, he's not on the list: Christof of Vampire the Masquerade: Redemption.

I think he's a pretty cool guy with a pretty cool story who didn't allow dickish vampire unlife to ruin his good character. If you went the good route, that is.

Not having anyone from Vampire Bloodlines makes that list completely bogus. I'm with TonyP that Jeanette would be a easy front runner, though that game has several cool ones that could make the list (jack,nines,cab driver). It is simply the best vampire based game ever made, so a token admission is necessary.

Raziel would have been a good choice too. Some may not recall, but the legacy of kain series was dead and essentially restarted by the first Soul Reaver game which replaced the main character. It was after the success of that game that they decided to keep both leads and allowed blood omen 2. I would say Raziel is just as important if not more then kain, since the first game was a 2D action adventure more similar to diablo then what the series gameplay is known for.

Yeah, the VtM games were probably the best of the best. They had such a wealth of great writings from which to draw. I'd love to see a current gen version hit all the right platforms.

That was a very good list. I'm just glad someone from the Legacy of Kain series got in it. I don't care if the choice was between Raziel or Kain, they're both awesome and to me the series holds a place in gaming history.

I'm shocked they put Jericho Cross (Darkwatch) on the list. I like totally forgot bout that game, its underrated