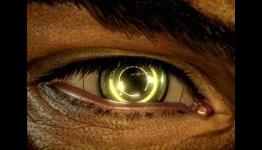 "Deus Ex is a series that invites players to hurl themselves upon web after web of interwoven mystery and back-story as they work to resolve its central crises. The fact that even the people making its promotional materials seem to get this is probably one key to why the game itself has turned out so well."

Im so afraid to pick this game up, a lot of friends are telling me the ai is a mess, if any one on ps3 that have the game please confirm this, because i need a game to play.
I just don't want to waste $60, so let me know please.

The A is fine if you're going to play stealth, but when they attack they act weirdly. Also the cinema tics have a "filter"(?), are badly compressed or something that makes the, blurry compared to gameplay, you'll specially notice this in the opening cinematic that has very close-up shots with a character.

also, if you're playing a localized version, it won't have english, god I was so pissed when I discovered that last night. I'm going to have to play the game with crappy french voice overs.

Just rent it, you would have to be the biggest deus ex fan like me to have to buy it. The game is amazing. A.I. is just as stupid as other games, even the big 1s like halo. The game is great, its deff. a goty contender even tho bf3 will get that.

sorry if this isnt much help, but i have the 360 version, and i havent encountered any problems.

even though i havent played the PS3 version, as you requested, i will still highly recommend the game to you, its fantastic.

Its all good man, thanks for the effort.

Great game, a rare game in a sea of boring repetitive bullshit.

I would reccommend this game to everyone who likes RPG/shooter games. I loved Deus Ex (my favourite ever game) and this is as good so far (about 2 hours in, only got it yesterday, UK).
Its also meant to be a very long game, by todays standards, over 30 hours some reviews say.

I'm loving this game at the moment. Anyone else see that Final Fantasy XXVII poster in Pritchard's office? Square do have a sense of humour after all.