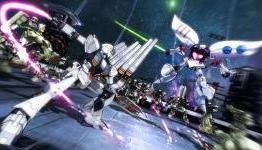 Dynasty Warriors: Gundam 3 is very obviously a game made for the cross-section of the gaming population that enjoys Gundam anime and Dynasty Warriors games. You’ll take your chosen character from one end of the board to the other, claiming squares along the way. Arrive at an unclaimed square and units loyal to your cause will pour out of it. Arrive at a square claimed by the opposition, however, and you’ll need to clear the area of enemies before claiming it as your own.