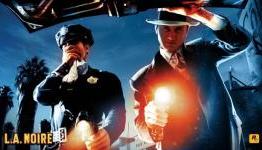 thatvideogameblog.com
- Comments (33)+ Comments (33)
TopNewestOldest
Expand all
The story is too old to be commented.

...and Team Bondi is still bankrupt :/

yeah...find that hard to believe but they did say that facial tech was un-godly expensive.

Can somebody give a link stating that Team Bondi are bankrupt etc ?

I hate it when people ask for links. Not only does it reflect their own laziness but it also makes it sound like they're insinuating that people are lying.

Why would somebody lie about Team Bondi going bankrupt?

That's what bad management does. And I know I will likely get slammed for this but its my honest opinion, I'm surprised it even hit 4 million. After the murder cases I just lost all interest and wanted it to end, but it wouldn't. And all that DLC added to the story making that ending even more of a grind. Basically as soon as the fun of picking up on lies wore off (or exposed its weaknesses) I just lost all interest.

Especially within a couple chapters in Arsen where people become so hard to read I just started guessing with no care for which option I was choosing. Like I say I know many loved it. But for me it needed to end about 20 hours earlier. And I normally want games to be longer too

And no its nothing to do with a limited taste in games, Right now my roster consists of, Sonic Unleashed, Killzone 3, From Dust, MK9 and Catherine, all of which I think are fantastic (other than the werehog). Catherine being the only standout 'unique' game to compare, I would say the reason I find it so much better than LA:Noire is the pacing

Yup I'm stuck on arson cases too. Can't finish the game cause I get bored...

@Drazz - Press on. You're almost there. I quit during the arson cases also. I finally mustered up the will to finish the game and discovered I was close to the end. The story got a little more interesting toward the end.

yep it didnt make a dime of profit

What about the PC version...

It's great that we gamers support creative games like Heavy Rain and L.A. Noire. It's so much better because MAYBE, just MAYBE developers will stop over-saturating the dull FPS market.

This is great news. 4m sales goes to show that both new IPs and unique refreshing ideas can be successful.

It depends on what your definition of "successful" is; great game, or great sales (or both preferably)

a successful game usually ensures a sequel or at the very least better support. maybe not in this case though, but generally more profit means they don't forget about you.

too bad they're still not making much money off of it due to bad management. Team Bondi might just fold.

Even though it sold 4 million it lost money, so while it looks good, companies are still going to want to stick with ip's that produce actual profit.

So far this year the new ip's have not made any money...crazy...

If a company goes bankrupt and don't turn profit after 4m sales.. something is extremely wrong with that company.

Indeed. And from what I've been hearing about Team Bondi...something is wrong with them (no offense).

Very poorly managed and the facial tech apparently was extremely expensive. As good as it was... I don't know I "need" it in future games if its going to run up costs, etc..

It has nothing to do with the company

4 million units is a lot of units.

4 million units should be about 100 - 120 million revenue for the publisher.

Game is still selling btw.
So how does anyone know?
Just wondering.

Its b/c they invest in new tech, probably thinking the facial tech is the next big tech like motion capture. But the flaw of facial tech is you going to have to pay a lot of money to celebrities with the face tech.

I didn't play la noir but it seem like half of the people in the game are celebrities.

Yeah, it had a lot of the cast from 'Mad Men' as well as other very recognizable people. I do wonder what they paid for the actors alone...

It deserves all the success it is having. One of the best and most innovative games I've played in a long time.

Sony or MS should pick up this fine developer and give them free hands to develop a sequel to L.A Noir. Love it or hate but you can't ignore that it was original, a technical marvel, and a breath of fresh air into gaming. Eventhough it didn't do everything right the potential in things it did right was bigger than in any games I've played for the last 10 years or so.

well then, one of them should do it just to keep Team Bondi alive.

I don't think this is a studio that's worth "acquiring" if that's what some of you are implying.

Use or acquire the tech, maybe even a couple of their devs that might want to move to the US or UK or something, but buying an unproven developer that, according to reports, Rockstar doesn't really want to work with again?
That's not good business

I was really forward to L.A. Noire but honestly, it left me dissapointed. It didn't live up to the hype and now it's overrated. I was planning on going for the platinum but I can't do it, this game is just too fvcking boring. It feels like a chore to play now. LBP2 and inFAMOUS 2 are the only GOTY worthy games I've played so far this year.

10 Historically Accurate Video Games That Can Serve as Educational Tools