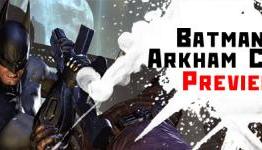 @XG247_Alex writes for @XG247: "The majority of hardcore gamers at least know about Batman: Arkham Asylum, even if they haven’t played it. The flowing combat, gritty graphics and the way the game stuck to the comic’s canon was a real shining star compared to what many of us worried the outcome would be. Batman: Arkham City promises to be more of the same, just better. By supposedly tweaking the not so good aspects of Arkham Asylum and pumping up the good parts of it, Rocksteady have promised a cracking sequel. The big question is this; have Rocksteady been true to their word and made Arkham City a better and more polished Arkham Asylum? Or do they deserve to be locked up with the Joker? (That was an awful gag, I’m truly sorry.)"

Adhttps://store.steampowered.com/app/1488200/Symphony_of_War_The_Nephilim_Saga/?utm_source=n4g&utm_medium=native&utm_campaign=sow_n4g_native&utm_content=png
- Comments (0)+ Comments (0)
TopNewestOldest
The story is too old to be commented.
60°3

Electronic Arts says "games are the social networks of the future"