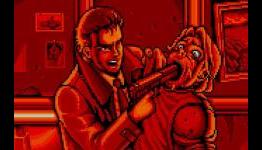 Andriasang: The surprise announcement Hideo Kojima was teasing for the latest Hideradio podcast ended up being a surprise indeed! As reported at Famitsu.com, Kojima announced Suda 51's Sdatcher, an original radio drama.

Because Kojima is a massive troll and has been for years.

Its a pretty old way of entertainment though I know its still big in Japan with fighting games such as Guilty Gear and Blazblue (though these are more or less radio podcasts online others are CD's).

I'm pretty sure its not that big of a thing any more in the US. However there still some people who do it and actually air it on the radio along with the internet. Here's one that I always liked.

NOOOOOOOOO! I thought this was going to be some sort of new Snatcher title with Suda 51 involved. Oh, the disappointment!

Seriously... I just got done playing Shadow of the Damned and even though the controls and graphics suck the game was dope!

that what everyone would think in this situation .
thank god i don't follow kojima podcast i would have been drived insane by now

All i know is......you can't talk a lot of shite while be snatched by the collar with a pistol in your mouth.

I'm pretty sure he just shited himself as well.

Kojima's Father in Heaven ask God if he can pass one more day with his son.
God, after beating again MGS IV on maximum difficulty, accept without any doubt.
First thing Koji father does when he meets his son on heart is this:
http://4.bp.blogspot.com/_S...

Well this was a letdown.

what a shit load of fuck..

There's a character designer and you don't need one of those for a radio show so I think we're missing something.

So now we have two renowned Japanese gamedesigners who haven't done shit the past few years but tweet about stuff we don't want to know about, even encrypted just to piss people off. I swear to god if Ueda starts tweeting about The Last Guardian I'll be on the next flight to Japan to kick some ass. Enough is enough, we want GAMES!

what a pitty. people are gathering for a new ZOE and yet this overrated-white-hair-on-a-spid er's-balls is not in the mood of listening. bad luck with your shitty project.

So is this his secret project? wtf! I wouldn't mind so much be we haven even heard a whisper about a new IP and the best we get about Z.O.E 3 is "I want to make it". To make things worse this is a radio drama in Japan where anime comes from! a Sdatcher anime would have at least been something interesting.

can you imagine a video game with Kojima and Goichi Suda , nerdgasmic

Kojima: KojiPro Will "Boldly Go Where We Have Never Gone Before;" Teases Surprises for 2023