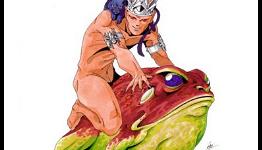 Blistered Thumbs: How can you screw up the designs of history's greatest demons, monsters, and deities? You have to see for yourself. It gets... bad.

Some of Atlus' Megami Tensei games have even been compared to Pokemon because of their emphasis on collecting different monsters, but the MegaTen franchise is lucky enough to have of all of the mythologies of history to draw from for its character design, resulting in some truly horrifying, awesome, and badass creatures. On the other hand, there have been some royal misfires, and that’s what I’m here to talk about today.