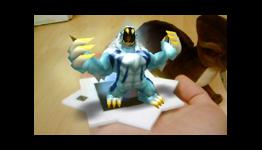 Chris Buffa (Modojo): Augmented reality is a simulated version of the real world that has become a staple of television broadcasts, most notably as the yellow first down marker in football games. You've also seen it on the news and reality shows like American Idol and Dancing with the Stars, whenever the overlay appears, urging you to vote. Suffice to say, it's improved the viewing experience tenfold.

Vita should do good for Aug Reality. The new fighting game looks cool. I would love to have a ghost hunting camera game. Like a Fatal Frame.

However Sony did show off an impressive tech demo that showcased AR that properly reads real world spatial data, which might lead to better interactivity and applications. The fact that it was demonstrated on a mobile phone means greater audience reach.

AR has really only caught on in the last 4-5 year and it's popularity gradually rising. It's still too early to start comparing it to traditional video game mediums when that has had over 30 years to mature.

Invizimals is not really a "blip", it is actually pretty popular and has arguably the largest community for an AR game ever (due to the fact it's got multiplayer).

AR games are not to different in nature from motion controls in that they require movement from the players side. In that respect, stuff like Mario on the Wii might have done well but, there are still many IP's that work and sell nicely on motion control gaming like Wii or Move so, I don't buy that AR needs an old IP to do well.

Also, the guy stated how silly one would look playing an AR game on the 3DS than states how cool a Pokemon game would look. That is either bias or inconsistency in his/her argument. xD

Sony is promoting the PS Vita with a new Christmas trailer