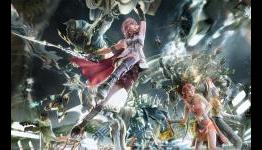 Final Fantasy XIII was hated more than it was liked. Gamers loathed the "western" tone Square-Enix inserted into the bonafide JRPG, and the results were catastrophic. Yes it sold well, but many fans have vowed not to purchase the sequel after what most deem a failed effort. Yet the publisher's trying hard to appeal to fans by using the same engine (Crystal Engine) which powered Final Fantasy XIII in an effort to elude console bias, and have built XIII-2 around fan feedback. It's also over 40hrs long, and that's without side quests.

i would like to add that varys from person to person

which it took me more than to complete 13

and then its taking me 130+ hours to platinum it

I'm still yet to finish XIII. I'm on the last disk, but i'm far from the end i think.

Why the disagrees? Did i said something wrong?

Your not the only one who got confused for a second.

a 40hour long interactive movie? No thank you.

I would of preferred a 40 hour long interactive movie over FF13.

Sweet! Ive always complained that crappy games were too short, now i can slog through a crappy game thats long! Gee we sure are lucky to be graced with this one!

the tittle say: "Dev Comments On Console Bias" but the ones talking about that are game-thirst themselves not the devs. Square just said that all versions will be equal due to the engine being good for a multiplat environment.

So basically their saying that both versions will look like the 360 verson. After watching the gameplay videos i believe this to be true

so I wasn't seeing things when I felt the graphics didn't look as good on the recent HD trailer.

From someone who played both versions at E3 they said the PS3 version still looks better but not the drastic difference like the first.

Games not yet finished though so expect the graphics to be taking up a notch.

I platinumed the game in less than 100 hrs, but it was an absolute chore. The only side quests were the battle trials. How about you switch it up? Yea, i'll be stupid enoug to buy XIII-2

I'm glad they're stating it's multiplatform from the start, but if SE has shown any form of console bias this gen, it's been bias towards the Xbox360. It may not make everyone happy, but I hope they keep Versus a PS3 exclusive to make up for the absence of The Last Remnant, Project Sylpheed, and Infinite Undiscovery.

For anyone keeping count, that's three exclusive Xbox360 games from SE (even if they're only the publisher in some cases) compared to zero exclusives for the PS3 from SE.

17 years ago, Square Enix delivered the most astonishing RPG prologue ever — and it paid off wildly