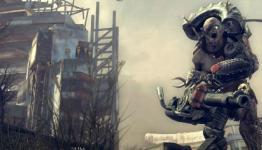 id tech head John Carmack has confirmed that Wii U technology brings the latest console from Nintendo to the same level as PS3 and Xbox 360, machines released five and six years ago.

Nintendo seems to like this trend of releasing last-gen hardware.

what trend is that? the only other time they did it was the wii itself and your all to blame for that since you ignored them when they didn't do that

is john carmack still saying the 360 is the most powerful system around?
after just 1 comment i was never able to take him seriously again

^ You got a link to that statement?
I recall him saying that that PS3 is marginally more powerful.

Taking things out of context is easy to do.

Do you assume every day u know more than John Carmack it will make u feel stupid when think about it.

When Carmack adds physics to Rage, I'll start listening to what he says.

Carmack said"The PS3 is still far and away better than anything else that’s ever been made... except maybe the 360"

Carmack is just an old legend that cannot work on more sophisticated(big word) hardware such as the PS3. That is why he prefers the 360.

about ds,3ds NUMBER1. since gamecube nintendo has been this way.

I don't give Carmack any credit for being a pioneer. The industry is completely different than it was back in the day. But I bet a monkey's uncle that Rage won't score higher than an 85 on Metacritic.

Although it's now on the level with PS3 and Xbox 360. I am still disappointed because that's oudated tech. Why not make something more powerful? Come on...

it's not outdated tech it's current tech.

I'm sure they could, it's just it'd be a lot of money spent in R&D when they know all the casual gamers won't care about the specs and that's typically who they target with their games consoles nowadays.

Nintendo have shown with the Wii that you don't need new, expensive tech to rule the market.

However, I will no doubt lose another bubble for speaking the truth which is quantifiable through official sales figures. I think N4G is getting more and more filled with fanboys, perhaps it is time for N4G to introduce proper age screening so 12 year olds cannot contribute anything to site... or take away from it as is becoming the case lately.

Lots of honest, geniune people seem to be losing their right to speak sense while idiots get to spout their crap all over the place.

@RedDragan
talking about others being fanboys? LOL

There are things that each excel at, other things each do not do so good. The difference between me and fanboys is that I do not hold back my punches when criticising what needs criticising, and others simply do not like that. Well screw them, I will carry on being harsh if needed.

It is outdated if you happen to have played on anything resembling a Gaming PC since 2007.

Saying that, if it can do native 1080p, with good filtering and proper AA then i would be fairly happy. Even with identical assets it would look far smoother and better than most of the games PS3 and 360 output.

Just a quick glance of what the difference it makes to how Duke nukem looks on console v PC should be enough to show how much more eye pleasing good filtering and higher res is.

Its at least 2-4 times as powerful graphically as X360/PS3 even if running on same CPU level.

Reading fail on this site's part!

"He also made clear that while it was not possible to bring id Tech 5 on the Wii platform, it would be possible to bring RAGE on Wii U using the iOS tech used in RAGE: Mutant Bash TV.
“Previously, the Wii was not a target. Id Tech 5 was just not suitable for the Wii at all. We seriously talked about possibly using the iOS Rage technology that I built for that for a Wii game. It would fit perfectly from a technology standpoint, and I think would have been really pretty cool as a Wii game, but we decided that it wasn’t the right time to jump into the Wii market."

He's not saying he has to use the iOS tech on WiiU. He's saying the WiiU can handle the same tech that 360 & PS3 use. The iOS tech would have been used on the Wii.

Just another site wanting to have a pop at Nintendo. Seriously, since E3, it's been like 2006 with the PS3 again. Look how that turned out!

bleah i dont care what no one says, there is no way a new ibm cpu and current graphics card is on par with current gen.

Late to the party..

I guess they do it to sell cheaper at launch.

Its on the same level. But the wii u is more powerful as developers have said over and over

The WiiU is slightly more powerful but there will be no games to take advantage of the power. Third party developers will not develop games that will take advantage of the WiiU's power because it is a new platform with no install base. The only third party games that are showing up on the WiiU are shovelware. All the games they showed will have already been released on the other platforms before the release of the WiiU. The only way for games to use the full power of the WiiU will be Nintendo exclusives.

Whats the point in spending a lot more money on the Wii U if it is just as powerful as current gen systems. I think I will just wait for the nextgen PS3 or 360

Honestly. If you have a family and you've got two kids and a wiiU with two controllers then you can tell 'em to shove oaf and they can sling their games to the controller and play there instead.

In a world of omnipresent screens & cloud hosting though I doubt it'll market well.

Also it's not going to be that expensive - the tech is OLD inside, the devices will play off their massive production lines for the DS and the form factor may as well be the wii.

These things will probably enter at the £200 level, bundled.

Oh yeah also if they don't upscale Wii games they can fuck. right. off.

Nintendo are being very lazy with backward compatibility- there would be a huge market for upascaled Wii and Gamecube games as a lot of HD gamers avoided the Wii this generation. Unless they have a PS3 style strategy in mind of just re releasing Wii games remastered in HD.

Because current generation systems aren't made by Nintendo and don't have the incredible games exclusive to Nintendo consoles. If all you care about is graphics, stick to what you know- for you, there is no point in purchasing the Wii U. I on the other hand love the gameplay Nintendo offers- straight up, no nonsense fun.

I'd love to play Nintendo franchises in HD. Even if the Wii U graphics "only" match those of PS3, they'll still look awesome.

any news on upscales for wii classics that i'll never play because they impale my eyes with their macroblocking on my 1080p screen?

I haven't heard of any upscaling.

Reggie said there won't be any upscaling for Wii games

How can the WiiU be as powerfull as the xbox360 and ps3?
PS3 is more powerfull

Is that fanbloy blinkers or just idiocy?

It says it as powerfull as the xbox. and the ps3.

How can that happen? if the ps3 is more powerfull

Yes the technology may be on par with the Xbox/PS3. But the RAM and CPU/GPU are not, that means a worlds difference.

Maybe Nintendo just have a different definition of next-gen. To them next-gen doesnt mean more processing power, better hardware, it's how we play.

It will be inferior once the 720 and ps4 arrive

Carcmack hasn't actually seen the hardware. He stayed behind when Nintendo made their presentation so stop jumping to occlusions about what's inside the Wii U.

That's what happens when half the manufacturing costs are spent on the controller. Thy should have it on RAM, graphic card or CPU

Yes because all we want or will ever need is better graphics. I'm not at all interested in companies finding new ways to play or come up with new player input. God forbid if they ever come up with true VR that would suck!! Let's just concentrate on graphics and that's all please!! /s

next year we will have 8 core cpus for basic desktops I mean cmon..

I think it is normal. What do you expect even the future consoles will feature a more powerful CPU-GPU-RAM and will support direct x 11 or 12 if will come out until then and blue ray. Don't expect a huge jump for future consoles.

The WiiU is way more powerful just going off tech demos ive seen 360/ps3 tech demos and they dont come close to the early tech demos of WiiU go on Nintengen.com watch the tech demos togeather and the WiiU ones look like CGI the ps3 1 is FF13 and the other 1 is the new engine designed to make 360/ps3 last longer the engine is only a few months old and it stands no chance the zelda demo is early and its 4x what u see HD TWINS EASY plus it took 5 years 4 360 to get the graphics u see today think 360 when it launched has it evolved because WiiU is already at same level but at 1080p/60fps.

All this talk about numbers and power the real proof we have is IBM have clearly said the WiiU has same cpu that powers WATSON SUPER COMPUTER FACT which is Power7 and he also says lots and lots of ram/memory and 45nm means only 1 cpu the Power7 and my guess looking at early tech demo's is 4/6 cores at 3.5ghz easy if u think otherwise ur drunk but Power7 is CONFIRMED FAN BOYS go look at tech demo comparisons on Nintengen.

RAGE Is up and running in 1080p as we speak on WiiU already done and thats a year before WiiU ships with the cpu/gpu still evolving Nintendo have sent safe bet dev-kits to devs with mimimum specs as there not final and half the developers still think with what they have now is many times more powerful.

I'd pay more attention to the Epic team and their Unreal tech at this point, and considering they have always shunned Nintendo for the Wii and have been really outspoken about it, and all of a sudden made a deal to bring Unreal tech to the Wii U I'd say there's promise in that. Doom 3 was subpar and if I do end up playing Rage it would be on my PC, so whatever Id or their team members has to say about a home console matters little in my book personally.

Hmmm other developers say its about 50% more powerful. I think the tech is still not finalized though. And a systems power is never fully realized at the beginning of its life cycle let alone a year before it even released.

how much longer are we gonna see these bullshit writeups when there is nothing known about what Is insIde the wiiU, i look forward to finding out all the same

The Average Gamer: Hands-On Thoughts About the Wii U

Mario Kart on Wii U - What Would It Be Like?