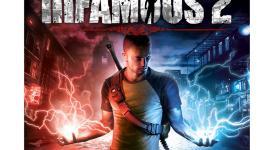 "Well as it turns out, inFamous 2 manages to keep and add to everything that was good about the first one while making a conscious effort to correct the mistakes of the original, and that's precisely what I was hoping for!" - Gordon Bryant

Gonna Pass? LOL! Love to see what game you do buy.

Well, my avatar tells you one ^^

I don't normally play one player games but i'm really enjoying this.

It reminds me a little of Heroes (TV show). Its going to be interesting playing as the Villian, playing through as the Heroe at the mo

Sigh... poor people. You better buy it NEW. Sony and Sucker Punch deserve your money by creating such a great title.

Wow,really princess that is by far the stupidest comment you have ever made just cuz someone dosen't buy a game knew means they're poor??Since i bought it for $25 from my friend does that make me poor,hell no it's called saving money.The only time i buy a game new are one's that i really want like BF3,uncharted 3,Twisted metal,The ICO/STC collection,Resistance 3.

Just because he's waiting for a sale doesn't mean he'll buy it used.

That's rather sickening of you to state imo. Wouldn't you rather he be able to afford the hobby he loves?

Sounds pretty good, though honestly I was really hoping that with the mention of the Beast in the first that the second would have Cole going around recruiting other heroes Mass Effect style, that woulda been so awesome.

Not going to spoil anything but you should give it a try. ;)

Honestly, after getting a Good playthrough done, have to say it did end up being much better than what I was first expecting.

The only thing I would fix is the pacing, but then again, this wouldn't be the first case of slow pacing present to build and develop relationships steadily, and then, pull off a climax to end everything with a bang.

I just finished my HERO run yesterday. I have to say it was an EPIC follow-up to the original.

Still got to play the origional lol good thing i got it through the Welcome Pack :)

I'm upset my ps3 got a green light error and died the day it came out. Im anxious to see if this is the last game in the infamous franchise or not. From what I've heard its one of the best endings in video games in a long while. Like Lord of Shadows was praised for it's ending.

Don't get me wrong, the game is pretty good, but it does get pretty repetitive. The gameplay is pretty limited (climb buildings, fire at enemies, grind on rails) thats about it. The ice powers are a little freshing, was getting tired of firing electricity all the time.

The game is awesome at the start but then the limited gameplay shows itself after a while.

The story is awesome, which is probably 60% of the reason I am still playing.

I am still enjoying the gameplay, don't get me wrong, but the limited aspect of it is starting to show. (Getting slightly more bored climbing, firing electricity)

I Miss the Karma System In Games

SuckerPunch looks back at 10 years of inFamous

5 Alternate Video Game Endings That Would Be Great Sequels