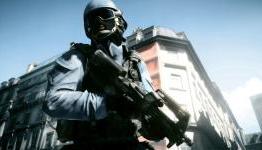 Gamesthirst: At Microsoft’s press conference, the first game demoed was Modern Warfare 3, showing off a heart-thumping mission which ultimately ends with a high-speed boat chase. Say what you will about the game, but the presentation was nicely put and well executed.

i will be getting both games

I found it to be very boring, to be honest. And while Modern Warfare 3 should us "more of the same", it came intense.

must of not noticed it....OOOHHH wait I remember now. I was watching mw2's boat chase scene and I woke up 15 minutes later.

Yes, there was a demo at E3, its called "Black Tuesday," the trailer these guys posted are from "Hunter Killer," from the Microsoft Conference.

But regardless, I agree that Black Tuesday trumps the BF3 demo shown at E3.

BF3's demo was meant to show off the capabilities of the engine. The MW3 demo was to grab the attention of people with ADHD...and i still think they failed.

COD campaigns have no pacing...they are just boring. you never know where you are or why you're doing something. you just know that you need to kill wave after wave of scripted scenarios with HORRIBLE AI.

I liked BF3's demo better even though it was a little dry. MW3's was very uninteresting to me.

Did. Watched it. Still not as impressed as I am with BF3. MW3 is running on outdated hardware with an outdated game engine. Would this have impressed me 2-3 years ago? Yes, but now it doesn't even compare to BF3.

Get a new reason to hate MW3.

Ya that was even more uninteresting than the other video... It basically did the same exact stuff as MW2. I'm surprised there wasn't a slow-mo scene in there.

Pretty sure one of the demos did involve a bunch of guys crouching around a door, then blowing it open, slow motion, pew pew, Zzz Zzz.

at least you got to control the tank in BF3....i doubt that you would even be able to crash the boat in MW3 even if you tried....very scripted imo

Time to wake up from your fantasy world...

I dont care for all this mud slinging but the Battlefield demo was a country mile ahead of the MW3 generic Michael Bay offering.

Are you Sleeping Little Boy ??
How old Are You ??
Boring is the Demo 13 Minutes and unbelieveble inacuracy on minute 5:10 when the Player misses the enemy and the enemy Dies !!

Stop talking about BF3 with Noob´s Opinion and keep spending your money just to say mw3 will sell more !!

REMEMBER * BF3 IS THE GAME, NO DOUGHT ABOUT THAT !!

* Well i know what you wanted to say about Being Boring !!

The list of Best of´s is so Large that it´s boring to arrive to the end! SPECIALLY WHEN YOU ARE A COD FANBOY lol
Here´s your Boring Big List !!

Better yet, we've already recieved our first award! GamePro has awarded Battlefield 3 with the Best FPS of E3 award

I'll admit that the Microsoft kicking-off demo was pretty cool and well executed, very well paced as usual whereas the tank level of BF3 indeed LOOKED boring (while it was visually stunning). But that's because of the more-realistic documentary pace of the game. Also looking at it and playing it is a different story. I'm sure I'll have my share of fun once I'll get my hands on.

DICE will have to show more dynamic levels if they want to appeal against MW3, and I'm sure they have some like the fighter one or the big night battle we had a glimpse of.

On the other hand, MW3 had also its dull level: Black Thursday. But this one is just boring because it's the classic generic Call of Duty level we've seen, no, even played 10000 times. And while the sub-marine level was pretty cool like a hollywood movie, it didn't give me anything "wow" that would make my money shift from BF3 to this.

The only thing the Black Tuesday video compares to is another video by Rebecca Black.

Both are looking good =]