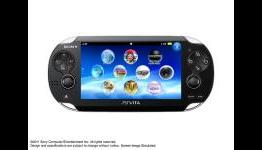 Why the PlayStation Vita May Very Well Become One of the Best Systems. Ever.

iAX: "I personally own a PlayStation Portable (PSP) system, and I often use it to play music (cause I’m a poor student who can’t afford an iPod) and of course, game! As many of you already know, the PlayStation Vita (PS Vita) was recently unveiled during Sony’s E3 conference on Monday. This next gen portable system from Sony boasts many features that are certainly impressive. Here are five reasons as to why I think the PS Vita might become one of the greatest portable gaming systems ever made."

Really impressed with this system, love my psp so this looks like a very good replacement.

Yep! Already have my Vita pre-ordered at GameStop!

Absolutely Amazing what that handheld can do, Uncharted: Golden Abyss was like OMG! THAT Good...

Does Gamestop have a release date in their system? I might import depending on where this thing is launched first. Yeah.... I like it that much.

Same here. The 3DS was the first console I've ever purchased. On top of that, same goes for buying at launch. And preordering a console. Basically, alot of firsts. Still haven't bought a game yet(yeah...i know). Waiting for the stellar games upcoming that (don't include) mario. Fighters, Action-rpg's, action-adventures. Good stuff.

Yet, I truly believe PSV(eat that psp2) will be a force to be reckoned with. Groudbreaking specs, awesome price, and REGION FREE!!!!

What really concerns me is that blockheadedness of people. Many gamers believe the 3DS at $250 was "way" to expensive. Fair enough.

Now. Compared to the content between psp1000, 3DS, and PSPgo, 3DS wins hands down. Clearly. Yet why the backlash? Was it because the 3DS is Nintendo's most expesive handheld? Maybe.

Honestly, I believe people are being baised towards the $250 handheld price. They didn't complain back in 2005 for the psp. They "did" complain back in 2009, yet that was due to poor digital foolishness. And now the 3DS recieves flack for have(not my opinion) psp graphics with tacked on 3D. We ALL know Sony's selling the PSV at a loss(said it themselves. They'll begin gaining profit in 3 years).

Well from what I have seen from Vita I just dont get it one bit..
Nintendos new Wii U also, dont get that thing either.

I personally do not get the appeal of the Wii U. I can kind of get the appeal of the PSV but I probably will not get one. When I game on the go I do it for like 5 or 10 minutes when I am bored waiting for something and I will do that on my Iphone. I can see it being useful for long journeys (unlikely to do them often being a student and all) but I do not see myself sitting down in my house playing the PSV when my PS3 is there with some really good games on it. I think we are a minority.

I find the PSv way way to similar to the PSp.
It looks the same and I can already see mums and dads saying " but you have all ready got one of them ".
Sony should have at least made it look different!
I have seen alot of games running on it too but because of the screen size they dont look any different to PSp games.
I really think Sony should have had 2 screens a bit like the DS so it would have sure grabbed a few new buyers.
I will stick to my phone too for games on the move.

The Wii u I really dont get You can take your games away from the TV. Wow thats what a DS is for isnt it.
Some of the demos where you hold up the controller is going to be good for Nintendo. Kids are going to be dropping them right left and centre. Oh and the golf demo. Whats that about. Just dont get it.

so, your main complain is that it looks to much like a psp, yet you want it to look like a DS?

Intelligent comment. Im not complaining one bit, its up to Sony how they do things, same fo Nintendo.
If you cant see what im getting at I dont intend to go into more detail and confuse you any more.
I gave 1 example how I feel the PSv looks to much like the PSp.

Vita may end up one of the heart favorites of what is called core gamers ever. Sadly, probably the last dedicated handheld aswell.

I'd be interested in knowing if we already purchased a PS1 game on PSN via PS3 do we need to repurchase for Vita?

nope. I'm pretty sure all of your PSN games will port over. Unfortunately your UMD PSP games are SOL.

The specs alone make it a must buy for me.
Emulation will be awesome on it!

I doubt it will have any emulation within the first 3 years of its release Sony will have 10x the security the original had i bet.

Makes it full of shit.

exclusive Games are what makes systems best ever

For my understanding Uncharted, Wipeout, Littlebigplanet are all their own games for Vita and not downgrades of Ps3 titles.

MGS peace maker was still a really good game even tough MGS4 was on Ps3 and MGS3 was on Ps2 and the game had plenty of resemblance to these titles.

well if you're gonna count something on a console and handheld from the same company multiplat even tho the games are different stories and have different gameplay quirks i can see your reasoning. but fact is games like that are different. you got mario on nintendo system and they all play like classic mario we all know but they are still different from each other. just look at lbp vita, using all the gyroscopes touchscreen trackpad in unison made it look like a different game than what i play on ps3 in lbp2.

The price point and the games were my biggest fear, however with a price of $249 and 80+ games already confirmed to be in development...well let's just say I'm excited. :)

Only one word to describe the Vita;

So far weve seen some of those 80+ games and aside from bioshock, its all ports/multiplats/console downgrades

i have both psp slim and the go,must confess the last few months i wondered why i still had them as the ps3 is being played constantly,this looks the best handheld ever from its spec and lay out,if its anythink like the ps3 in terms of games now its a winner hands down

Why the PlayStation Vita May Very Well Become One of the Best Systems. Ever.

this is usually said in about every generation of gaming consoles/handhelds.

Sadly 3G Connectivity shouldn't a point seeing as its exclusive for one network and not open to every (major)network. I'm all for 3G but don't keep closed off where only certain amount ppl can use the feature. Seeing as it is 3g(talking about the 3g model not the wifi) the battery life won't be good as its counterpart, so basically a double edge sword.

"Why the PlayStation Vita May Very Well Become One of the Best Systems. Ever."

Simple, because it has everything a gamer needs in a portable gaming system.

Right price, great games, region-free...off to a great start that's for sure.

I agree, the Vita is looking to really shake things up in portable games. As a PSP owner, the games look fantastic but many of them are hampered by compromised control schemes due to only having one stick. All Sony had to do was add a second stick and I'd be happy.

But they did so much more with the Vita and at an awesome price. Now console games can be ported over to Vita and they'll look & feel great. Since it outputs 720p so you can easily hook it up to your HDTV and you've got a system to play on the go and at home.

Add to that the rumored PS2 support and this thing is golden. As long as Sony prevents piracy, it is looking to be a runaway success.

Wow, you are absolutely right:

When asked if Sony had plans to introduce a video-out cable such as an HDMI, here is what they said:

”No, PS Vita does not have a video output feature.”

yea oh well tho not a deal breaker for me. but we can always expect it in the "new and improved ps vita+ with internal storage, video out capabilities and 4g!!!!!!" lol actually thats probably exactly what will happen >.>

Not the greatest system ever but it looks like it will be a winner. @ VampiricDragon. Dragon Crown, Gravity Daze, Reality Fighters, Lil Deviants, Smart As. Sound Shapes and Ruin are ports and downgrades? Look, if you must troll at least say something clever and insightful.

has the potential. I was more impressed with the Brain/Trivia game, little deviants, and sound shapes than uncharted. that combined with virtually full psn integration and the usual playstation video/audio support Vita is a hard package to ignore no matter what kind of handheld you want.

Apart from that... the Vita is very impressive, but I hardly think it's going to be the greatest system ever. Sure, it can play games that are comparable to a console title, but honestly... is that what portable gamers want? A console experience?

I don't think so. I think that's where Nintendo has an advantage. Granted, it's their only advantage, as the power of the 3DS is unimpressive at best.

I have a PS3, why would i want a Vita. I dont want to play the same game that's been watered down, in a park.

all the playstation portable games are just rehashes of games on the PS2/PS3. Id much rather play PS3 games on a 50" HD screen 7:1 surronund sound, than a crummy 5" OLED screen with bad control placments.