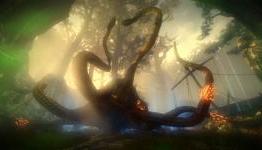 Is The Witcher 2's first boss fight just too hard?

Is The Witcher 2′s first boss fight simply too bloomin’ difficult? Plenty of people seem to think so, if users on the Good Old Games forum are anything to go by.

I really hope they don't mess with this game because people can't beat this thing on the first try...

Lol for once we actually have a game that needs tactics to finish up, why complain?

People actually need to learn to use all the tools the game gives aka signs, potions etc not just play it like a hack and slash.

They're mainly complaining because they can't just straightforward go up and attack the boss till it's dead. The Witcher doesn't just work like that

I can understand SOME amount of complaint due to 1 hit deaths, but you're a person against a GIGANTIC creature, and you actually have to dodge and use your head.

I died around 6 times on the boss, but that was because I was figuring out what to do. Whole point of games is to challenge the player into overcoming a situation, not being hand held into going "attack here". The irony in my statement though, is that the game IS giving you hints on this fight to begin with.

I mean Demon's Souls had the same effect of getting the player intentionally killed, and you had to move on your toes in that game too.

it reminded me of a wow boss fight. died a couple times then phat lootz.

No not even close. Rolling when a tentacle drops, then smashing X to cut it, repeat 4 times, then a quick time event plays out to drop rubble on it, and then the final thing to do is run up the rubble and drop a bomb down a hole. It's fuck easy. If these noobs are dying then turn the down difficulty or go back to call of duty.

"X"? you mean to tell me that you are playing this game with a 360 controller? NOOOOooooooooo...

Too hard?! You only gotta trap 3 tentacles, do a QTE, then run up the fallen debri for an insta kill!!! How is that too hard? I thought the fight with Loth was tough, not the monster.

it's not hard. it took me a crap ton of tries, but it was only because i didn't realize how you did the last blow to him. after i figured that out, it was a cake walk. i played him on normal, but since then i've kicked it up to hard =P

Why? You and I may enjoy the harder challenge but we ARE NOT the only type of gamer out there-even on PC it would appear there are plenty who are willing to go into a game with a known previous instalment that wasn't a cakewalk and expect to be able to ghost through it on easy mode. They play purely for entertainment-not for a challenge and who're we to say "You're doing it wrong!!"?

I think it's a bit of a shame for someone playing on easy to have to try and beat a boss, the first sodding boss over 50 times!! As log as we get the challenge on harder diffs why shouldn't the easy diff be there for people who want to see the story unfold without breaking a keyboard/controller? I know you were prolly being a bit daft and don't care but you'd be surprised just how many people ACTUALLY begrudge less keen gamers their chance to experience some better games.

Whatever, I just imagine it's shit if you paid for a game and can't get by the first boss even on easy-surely devs can give people a level suited to them,no?

"it would appear there are plenty who are willing to go into a game with a known previous instalment that wasn't a cakewalk and expect to be able to ghost through it on easy mode. "

You have any idea how bad that sounds?

There's a target audience they're going for. This game isn't for everyone.

Also you should look onto the posts retaining about the person "dying 50 times on easy", because they pointed out the stuff he was doing very incorrectly.

this boss was great. wonder if people know they have to do something else apart from slash lol

a bit offtopic, but i can't rendeem my dirt 3 VIP code, anyone else experiencing xboxlive marketplace problems?

why are you reading a news about first boss if you don't want to know.

Blame your own idiocy

wtf, the boss wasnt even that hard, i mean sure he one hits you but in this game you basically have to live with that magic shield on, oh and dodge ofcourse.

sure i died like 8-9 times but who cares, buncha noobs

The magic shield stops you from regenerating vigor(mana) which is also needed to be able to block with your sword so not useful to keep it on all the time but definitely for this boss.

The boss isn't difficult either its just a "Learn the pattern, Remember the pattern" boss. Boss like that obviously require a little trial and error.

i did not have any problems on easy mode. although i did die several times on normal mode.

Are you kidding me, beat it on the first attempt. Just be sure to get the poison resistance potion and roll alot during the battle...It was actually pretty easy!

I doubt people are likely to say they cant beat him if they can, though, don't you? If they find easy too hard then what's the harming it being easier?We would still have normal and above so why not? I don't see why we should keep games just for those who can cope with playing them at what we'd call a decent level-not everyone is as keen a gamer as me or you and for those just starting off easy modes should be accommodating shouldn't they? You don't have to play on easy now, do you?

Though I'm not ignorant enough to say casual just shouldn't play the game but what I propose is that developers need to make difficulty level such as "casual, gamer, hardcore gamer" and etc...

maybe not even 3 options just 2. "casual, gamer" and if you're even more hardcore gamer you already know how to mod or find mods to make games more difficult.

What's funny is the sorceress tells you what to do for the first half of the fight. After that it's common sense, just open your eyes people. I wonder if these people are going in prepared or not? There are quests that give you the option to find materials and create some goodies to help deal with the Kayran.

I had more difficulties being swarmed by nekkars in a cave than dealing with the Kayran. To each their own I suppose.

The first boss was easy for me. Standard wave-based boss. Trap the tenticles in a YRDEN (the sorceress actually tells you that part), chop 'em up. Dodge the front 2 tentacles (REALLY EASY) then do the rest of the tentacles.

Once the bridge collapses, climb it (on the left hand side) dodge the rocks it throws at you, then BOOM explosive in its head. /boss

It's not like the other bosses that can actually hit you even with really, really good blocking skills.

I am an experienced RPG player and i had a tough time beating it. Playing on hard.

What the gamers have become?They can't even beat a simple monster.The first boss needs just 3 yrden,a QTE sequence and a jump on a platform to finish it off.How come these become difficult.

The kayran was easy... the assassin of kings not so much (until you start using aard).

You're not exactly gamers then, are you? lol 50+ attempts to beat the first boss and God-knows what non gamers whom are of the opinion they are have tried.

HEHEHe...The Kayran is actually quite easy if you find the right tactic...Probably the easiest boss in the game...Lothar and the F$#%#ng visitor for instance are there to just brake your balls.And in the Easy mode the damn game is too easy to be fun anymore...They really need to address those issues in the patch...

Looking back to 2011 and The Witcher 2: Assassins of Kings

The Witcher Series Has Sold Over 50 Million Units