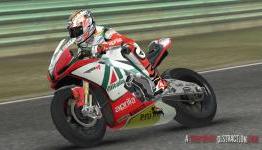 ATemporaryDistraction.com: "Right off the bat SBK 2011 positions itself as a game for “real bikers” – one for true superbike fans. But like wandering into the wrong pub and feeling a dozen steely ‘We don’t like your kind around here’ glances cast in your direction, the game doesn’t make it easy for newcomers to fit right in. If you’re new to the series and more used to arcade-style racers, you’ll have to work to earn a comfortable place amongst SBK 2011′s tougher, heavier and more realistic mechanics with nary a tutorial track to be found to ease you in. If you can conquer the steep learning curve, though, Milestone and Black Bean’s latest superbike sim is a thrilling, rewarding racer that’s tweaked to perfection where it counts."

Adhttps://store.steampowered.com/app/1488200/Symphony_of_War_The_Nephilim_Saga/?utm_source=n4g&utm_medium=native&utm_campaign=sow_n4g_native&utm_content=png
- Comments (0)+ Comments (0)
TopNewestOldest
The story is too old to be commented.
110°
C/A+
7