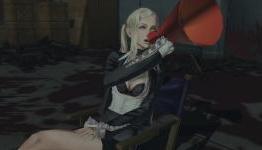 Several new screenshots have been revealed by Amazon for No More Heroes: Heroes’ Paradise, an action game that is coming exclusively to the Playstation 3 later this year.

This game is going to be sick with Move!!

Looking forward to it.

Move won't make much difference unless they totally change the gameplay from the Wii game as in Wii the motion controls aren't much to see. You only use vague motion prompts to do finishes ,the odd wrestling move or to charge your beam katana.

Don't get me wrong NMH is stillone of the very best Wii games there is but not because of it's controls because, if anything, it's more of a button masher than anything else in terms of basic combat. I hope they changed it for this but I doubt it and am still waiting to play Desperate Struggle on the Wii. I gave up looking after the first delay so I'll have to check if it came out in the UK eventually. hope it did.

Yeah, played it a bit on the Wii. But I just feel that a little more responsiveness and tighter graphics will make it all that much more immersive.
Great comment btw.

Can't wait to get my hands on the game, especially the Move integration.

It's out Friday in the UK. US folk have to wait till August !

So it's really true it's out this week? Woo-Hoo!

Up Up Down Down: No More Heroes

Characters with Character: Travis Touchdown from No More Heroes