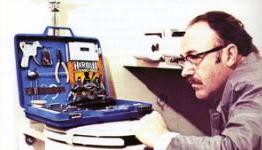 A teenager has been arrested in Saskatoon, Canada, after he was caught giving a murder confession. How was he caught?

Wow, what the hell? Kid shoots a girl with a stolen rifle, cops suspect him and use his Uncle to get a bug in his 360 in exchange for dropping a freakin DUI charge? Crazy.

I personally wouldn't have let them basically perform a sting operation in my home, and be the one trying to get him to confess. I would have just let the police catch him on their own.

But its not that outrageous that the uncle gave him up. I feel no sympathy for the kid. He took another persons life, let him rot in priso, but he won't since hes a minor. I hope they try him as an adult, when you're 16 you know whats right and wrong.

Family or not, if you're a murderous piece of crap, you deserve the consequences of your actions. And from the sound of it there was no self defense or anything like that. He stole a rifle with intent on murdering that girl. I really hope they try him as an adult.

" I personally wouldn't have let them basically perform a sting operation in my home, and be the one trying to get him to confess. I would have just let the police catch him on their own."

What if the girl that he killed was your daughter, would you still feel the same way?

Edit: I am talking about his first comment. The cops are here to serve and protect but I have seen instances where cops are too lazy and rather have a sh!tload of cold files instead of doing some real detective work.

Bald3star did you even read his post? Wtf? He wants the harshest punishment on the guy. That's exactly what the parents of the dead person would want.

The uncle had no involvement with this girl and didn't even know the circumstance of the situation. Did the cops even have a lead on the guy, or was this confession the only valid proof they would be able to find?

I'm all for justice but I think the authorities needed to do some actual detective work. Not coersing a relative to roll over on the suspect. For all the uncle knows the guy could've been innocent. He may have lied just to sound cool in front of his uncle, you never know with kids these days.

Yes I would want to find out who killed the girl, but I wouldn't want to put the wrong person away either. For all we know the kid didn't kill her and he was just blowing smoke. If this is the only evidence they have linking the kid to the murder than its not exactly a smoking gun. Especially if the kid denies the confession. And as a member of the jury, if this was the only thing they have linking him to the murder along with some most likely circumstantial evidence, I would not be finding him guilty (if he doesn't actually confess to the cops). When finding a person innocent or guilty you have to prove beyond a reasonable doubt that they are 100% guilty and based on what I've heard so far it isn't exactly iron clad.

What I want to know is whether the uncle knew about the murder before he was approached by the cops to squeal. If he had previous knowledge of the murder than he should be charged as well.

This is the main reason I said I wouldn't help with the sting operation (If I were the uncle). If I didn't actually know about the murder and the cops confronted me with trying to do a sting on someone and all they had was circumstantial evidence, there is no way I would've helped them. I'm not going to throw someone under the bus when I don't even know if they are guilty or not.

If I knew about the murder beforehand I would've gone to the authorities immediately. But without previous knowledge and without a solid case I would never have done this operation. You're basically calling him a murderer without actually knowing if he is or not.

what an idiot, confessing to murder over the internet

Even that idiot could probably make better sense of that article than you did, though :)

The cops brought this story online, not the kid.

I don't think that's what he meant. He clearly didn't read the article and assumed that the kid was playing online and confessed to someone.

To the people wondering how the game was bugged, as it was guitar hero I would reckon that the guitar had a bug in it

They were playing guitar hero locally. Read the article ffs.

How exactly did they bug the game? I read the article and they did say the game and not the console, so what they put some code on the disc to record everything from the mic and then busted him? Sounds fishy.

It was probably a microphone inside a video game case and when the boy was over at his uncle's house they could hear everything the two were talking about. He didn't confess over the internet, just to his uncle. It was the equivelant of his uncle wearing a wire, just the wire was in a video game case.

Nobody would be able to hear anything over the sound my 360 makes... I'm guessing it wasn't on...

I don't know who's worse here. The murdering moron kid or the drunk snitch Uncle. Wonderful family they have.

Glad I don't know you people who disagree. Probably a bunch on snitches.

shouldn't the first hint that something was wrong was come play guitar hero with me? haha but really pretty cleaver

Clever stuff - those police must be awesome programmers....

WTF. Do these people not read what they write and wonder to themselves if it makes any sense?

Bring out the cleavers.

its not snitching when murda is the case

Don't forget burning down houses with RRoD.
And scratching your discs.

lol pretty sure the xbox itself did not catch this kid.....stop being a troll

and i think SkyRim will be getting GOTY

who in the fuck would disagree with everyone when all they pretty much said was murder is wrong. there are always fuckers that disagree with logic on n4g. half the human race sucks i swear.

i have a theory that its the kid who committed the murder they have pcs in juvenile detention centres don't they? lol

I've only seen it twice; the first time more than 10 years ago, and the last time just a few days ago. Great film.

In Dead Space, No One Can Hear You Stomp