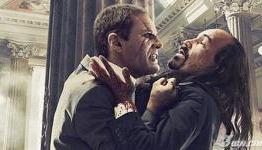 Despite the two averagely rated Kane & Lynch games , it looks like Eidos / Square Enix isn't giving up on the series yet.

I can't be the only person happy about this. Watch the third game be awesome.

I actually like the Kane and Lynch games..
They just needa spend more time on the gameplay.
The controls are weak, the aiming is kinda off and stiff..
If they polish the controls and game mechanics, the game would be great.

There is definite potential for these games. Especially online, the modes are great!
I sure as hell hope this time around that they allow 4 player system link! At the least.
And, I don't mean four xBox's, one player per xBox, allow two players on one xBox.
Make it split screen, and let me link with a friends xbox for a four player heist.

There is no indication from the first 2 games that the 3rd would be anything but a soulless, vulgar, boring experience where even the in game characters seem like they are completely disinterested in what's going on.

You are not the only person happy about this prospect. Although I have my issues with the games I enjoyed them for their no holds barred atmosphere.

People that acting as if Kane and Lynch had control issues and are wanting Hitman 5 seem to forget the same clunkiness, by virtue of it also being an IO product, were inherent in that series as well. It is a case of misremembering for the sake of beloved nostalgia. Both series had/have issues yet both possess their deserved fanbase.

It should be understood the multiplayer in Kane and Lynch is addictive as hell for it's unpredictable nature. A lot of enjoyment to be had in that game.

The other good news is the Kane and Lynch movie, despite Cannes posters, appears to have dropped both Willis and Fox. Better a movie is not filmed at all if the casting is so far off the mark.

Can't wait! I love Kane and Lynch but the second one sucked!

Dog Days sucked Donkey balls for the most part imo. Worst ending ever

although no one can say it better than this guy...

just let it die already! the previous 2 games are horrible!

Yay, more time wasted on this miserable franchise. Just make Hitman 5, nobody would miss Kane and Lynch if you quietly swept them under the carpet.

They are making Hitman 5. There's already a few leaked images..there'll be an e3 blowout for sure...

I sure would love for a Hitman 5, fer sure.
I just hope that they don't screw that up..
Hitman is probably one of my favorite franchises.
At least, it was for the last generation, definitely.

But, with some of the games they are pushing out, iduno..

I loved the idea of Kane and Lynch, and even hoped the 2nd game would be good. But it was not to be ;_;

The concept of Kane & Lynch is great but the 1st one was about an average game and the 2nd did even worse than average.

They should forget about this series and go back to making Hitman games!

Am I the only one who thought the 2nd game was actually pretty good?

Don't get the hate for this franchise. The series has a shitload of potential, eidos has just never found it's stride. There good at making games, hitman speaks volumes about what there capable of. They just need to cap it off right. Don't abandon k&l. There is a piece of gold, buried under that sand and dirt.

I loved the second game. Especially on the hardest difficulty. No four hours of gameplay there...
More please. Preferably with a bit more variation in the gameplay department – but don't touch the graphics and atmosphere!

Good! I like K&L, but i do have to say that IOI arnt really great storytellers to be honest but they do now how to create a good crime thriller such as K&L. It reminds me of that movie "Heat".

I loved Kane and lynch, both, so yeah... I'm chuffed with this result. Although between hitman 5 and k&l3 I'd still pick hitman.

I love Kane & Lynch, but please take your time this time IO. The first game had FANTASTIC settings, environments, and characters, and a great story. All of that was ruined at the end of the game when you went to South America. Those levels were so stupid and cheap, it almost made me quit the game before beating it. The game's controls were also questionable, but I adapted.

K&L2 tried something new. It's a lot grittier than the first, with a decent story, and while the controls got fixed, many complained about the shaky-cam feature giving them headaches, seizures, etc. This could be turned off in the options, however. The game's main flaw is how short it is, as you can beat it in around 4 hours on Normal difficulty in one sitting.

That's the problem though. The game was meant to be played in one sitting, like a long action-thriller. When you play it like that, you gain an appreciation for it. The game still felt rushed though, and Fragile Alliance was an awesome gamemode ruined by the crappy servers of K&L2 and no one plays K&L1 online anymore.

Go ahead and make K&L3, but make sure it's a great game. Bring us Hitman 5 and Freedom Fighters 2, dammit!

Are the free Xbox Games With Gold titles for July 2017 any good?

10 Video Game Movies That Are Never Going to Happen