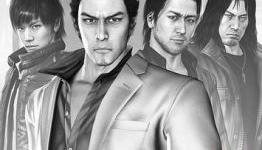 Yakuza 4 is a long and rewarding game, delivering much more of the outrageous brawling and equally outrageous melodrama that are staples of the series and introducing three memorable new protagonists who can each stand proudly beside the charismatic Kazuma Kiryu.

Im in part 3 at the moment Akiyama story is just lame the story gets real good in part 2 and 3. I just started part 3 im around 28 hours.

Still with Akiyama after 10+ hours, at this rate the game will take me 50+ hours to finish.

@P_Bomb
Please tell me how to get 10m yen

@newmonday
Save up a mil' if you can, make a save near the Ryugojo (sp?) casino in north Kamurocho, buy 10,000 chips there for a million$, bet 1 or 2 thousand chips on a DRAW in Baccarat which pays 8-1 odds. If you win early then cashout and trade in your chips in the casino for some super expensive plates and then go sell those plates to the pawn shop in south Kamurocho for $$$. Save and repeat.

If you don't land on a draw, just reload your save file and try again. Larger bets give bigger payouts, so with a little luck you can do this really quick or it can take a while reloading saves.

Year of the PS3

Does the game welcome noobs.

I've always wanted to get into Yakuza but have never tried it.

I suppose I should play the demo.

Yeah, there is a very nice summary of the series in the beginning of the game in video form.

3 characters are new; this is the most newcomer friendly Yakuza game.

This game plays like a JRPG in modern setting, so if you like JRPGs you will love this game.

I've played for about 2-3 hours... Yakuza 4 is my first Yakuza game, and it does a great job of helping us noobs out.

I just wish they changed the map, so you can freely zoom in and out.

I better hit that demo than and see if its worth buying.

Its just I have so much to play yet LBP keep dragging me back. That game is limitless.

the only problem is that the demo just shows u the fighting mechanics of each character and thats it so i was disappointed with demo.

you can't really get much out of this game by renting it either. it plays a lot like rpg to be honest mixed with brawlers, so don't expect a 7 hour game cause you would want to do everything as the replay value is pretty high.

dude.. take your time and get Yakuza 3. it's great. these series has million things to do. finish Y3 and then get Y4. and yeah.. find lots'a time or u can just run through the story straight.

Yeah Bathyj, what everyone has been saying is definitely accurate. The Yakuza 4 demo is actually a really bad representation of the game, because it's just a handful of fights and not the actual free-roaming story/RPG gameplay. Just like Nix said, take your time with this series, and consider giving Yakuza 3 a try first. The game is pretty cheap right now (around $20 USD on amazon and several other retailers last I checked), and it's a massive game with a lot of content (potentially over 60 hours). Things such as mini games (pool, darts, karaoke, golf, bowling, and many others), gambling halls, 101 Sub-story missions, Hitman missions, a fully developed battle coliseum, and much more will keep you coming back for more to do.

Yakuza 3 also has backstory videos in the beginning of the game (which can also be accessed from the game's opening menu any time), and those will help update you on the story and relations between a lot of characters you will meet in the Yakuza universe from all the events in Yakuza 1 and 2. Playing through the game also will give you a better understanding and connection with the series' main protagonist, Kazuma Kiryu. In my opinion, it's definitely worth starting there first.

If you aren't enough with that, I suggest you to try Yakuza 3 first.

Either buy / rent it, Yakuza 3 would give you a clear look of this series & game-play.

The demo isn't indicitive of the final game at all. Like...at all. A rental is a better bet if you're not sure.

This game is my favorite game of the year so far.

Yakuza is an amazing franchise.

Playing the game right now. I only played the 3rd one, and I was instantly hooked! That's the reason I bought the 4th one hehe

I've never played a Yakuza game before but I bought 4 from Best Buy for $39.99. Unfortunately, it's backordered and I haven't gotten to play yet :(

here! they talking april 4-15 yet they took my money alread and one of the stores near me has it

Loved the story of Yakuza 3 so I'll pick this up at some point.

Gamespot has done a real test of the game, pushing the experience through hours.

Giving the game its chance to deliver what it has to deliver.

I think they know what video game is about, YAKUZA is one of the best licence of this generation console. The game deserves such score and even more.

I like Greg M. but I hated his review. I get it, everyone has an opinion. But him as a reviewer, a professional reviewer I believe his is unfair. 6.5 because you're bored of the series? All the positives he stated, thrown out the window because he is bored of the series? No.

Anyway, thanks for all the understanding reviews, including this one. Call me biased if you must.

Thats why I keep saying, a review IS NOT an opinion.

It should be a gauge of quality, whether you're into it or not.

He's bored of the series you say. So he's bought his own expectations and baggage to the game. He's already made up his mind about certain things before he's even played it.

A thermometer is not an opinion of the temperature. Its a measurement.

I could play Mass Effect.
I can tell, its high quality. The graphics, the story, controls could all be great.

No. I shouldn't. I should judge it for what is, not what I thought it should have been.

In cricket we say, play each ball on its merits.
It basically means, dont decide where you are going to hit it or what shot you are going to play. See the ball first, and then decide based on what the ball is doing, not on what I decided before it was even bowled.

not how it works moreso when your dealing with a series. problem with yakuza is the overall gameplay hasn't changed and its not the best it could be

Now i hope that a lot of ps3 users, including those fanboys on forums that are happy to have exclusives just for the console wars but don't buy them (exclusives), all of these users gonna give its chance to yakuza 4 and buy it.

We know now that if the game have solid sells, YAKUZA KENZAN will be also released in the USA, that would be epic.

I think that all the people that take their time to play their games, enjoy them to reach 100%, love video games with a great background and rich gameplay with sidequests, minigames, and fun factor pushed to the limits gonna love YAKUZA 4.

Now we are going to see if PS3 users buy games, or if they are just happy to say "Year of the PS3" on forums.
One of the largest video game webzine accord 8/10 to a true Japanese game (i think it deserves more but it is my opinion), to all the people that are nostalgic and all the newcomers that want to discover japanese video games, i think YAKUZA 4 is meant to be played by all of us.
PEACE.

SEGA didn't have much choice but to put Yakuza on the ps3 because that's where the fan base kinda exists from the previous generation, so they were just assuming that most fans would just support sony again. SEGA is not rich like Rockstar, so they wouldn't want a potential franchise to bomb on them.

This game is awesome!

great review , good game . greg millier is a fkn douche with his shitty review of 6.5 he can stick it up his a**

8 Yakuza games coming to PlayStation Plus in 2022, starting this month

Drowning Under The Weight Of My Pile Of Shame