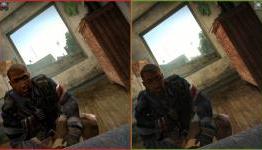 Lens of Truth writes "Welcome back for another exciting Head2Head Analysis! This week we bring the war to your home with THQ's Homefront. Earlier in the week we showed you the difference between the two versions in our H2H Screenshot Comparison. This week we'll let you know which version you should be picking up by deciding a winner between the PlayStation 3 and Xbox 360 versions. Brace yourself for war , and step on in to our latest H2H Analysis!"

It looks aiight on both systems.

The game looks like crap on both systems, but I agree the crap on the PS3 looks fresher. And that's a dugusting & good thing.

I hate seeing the staff comments for some comparison, some of them just seem irrelevant. This isn't about where your friend are or anything, this is about performance and graphics.

"Although the PlayStation 3 version had slightly better visuals, I plan on playing this on-line and all my friends are on Xbox live. Considering I probably won’t be playing the single player campaign first, Xbox Live is where I’ll be."

It just seems like a pointless input when your comparing performance and graphics. Yeah he said it's better looking but why have an input if that will most likely be your reason on every comparison then?

Just saying, it's like this this:
360 had the better performance overall and graphics, less screen tearing BUUUUUUT all my friends are on PSN so i will go with that version instead.

It just seems like a useless point, especially if your trying to convince gamers which version is better.

It's called Staff Opinion. What every other site gets to have a opinion but they don't?

because i thought these Staff Opinion were based off technical surroundings and not based off friends list. Thats the whole reason behind the H2H, plus i never said they shouldn't get an opinion, i was just saying they should have one that is actually related to the H2H rather then say "My friends are here". Look at the other two Opinion, both strickly based on what has been accomplished by the H2H.

PlayStation 3 does it again. But I gotta say, interiors look slightly better on the XBox 360.

Except on that one with the wall where they didn't let the 360 versions textures load. It's LOT, what can you expect?

@DelbertGrady
Yea cause its LOT fault that the Xbox 360 takes 10 seconds to load their textures. Actually that kinda pathetic. If you watched their video they walk around the room for a little and the Xbox 360 still haven't loaded. Stupid LOT they should have waited longer before comparing. NUMB NUTS.

Why even bother comparing this game? It was pretty ugly to look at no matter what you played it on.

Ugly SP fair play its like fallout 3 but a fps. Though the mp is quite addictive though it needs another patch

why didnt the PS3s have AA?

Hopefully the PS3 can out do the 360 or at least be close to it with crysis 2, thats when these articles from LOT and DF will get hot

The game is a steaming pile of crap compared to better fps games out & others coming out later this year all the way into 2012 so i'll pass on this fps game not worth my money or time.

I like the less jaggy version clean lines are the thing i notice most.

This game is really horrible!

.
This game looks pretty bad on both systems. Still, I've read that it can be fun on line when you can get on line. I may rent this in a couple of months when they figure out how to fix it.

Looking back to 2011 and the arrival of Homefront

Pure Opinion: Why Shotguns Should Be Taken Out of Multiplayer Shooters