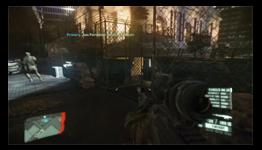 PSLifestyle writes: Crysis 2 has garnered massive attention in the recent week due to an erroneous PlayStation 3 demo which released to thousands of excited gamers.

Adhttps://store.steampowered.com/app/1488200/Symphony_of_War_The_Nephilim_Saga/?utm_source=n4g&utm_medium=native&utm_campaign=sow_n4g_native&utm_content=png
- Comments (178)+ Comments (178)
TopNewestOldest
Expand all
The story is too old to be commented.

I already knew this. The PS3 is such a powerful console. I knew crytek wouldn't dissapoint.

well I thought they dun goofed but apparently not

Too bad the game still blows though.

LOL, don't be a douche.... the ps3 version of most multi-platformers sucks

The Ps3 versions of games are 90% identical. I havent played one yet where the differences stopped me enjoying the game. Most the time they dont even look worse, they just look different.

This whole debacle has been a perfect example of the media taking the tiniest difference and blowing it it all out of proportion and trying to crucify the PS version.

plus look @ the video discription..

I completely agree with BathyJ.
I find it stupid arguing over which console is superior over which over the tiniest detail and treating it as if it's a game breaker. I don't get the logic over that. Besides aren't both versions inferior in comparison to the PC version?

The PS3 version is solid. Why is that not enough for some. Some ofyou have your expectations to high for the PS3 and that is Sony's fault. There are things that PS3 can do better graphically, and there 360 does better. Developers I think make the mistake of telling people that the games will look the same. They can both have great quality but still look different. Nothing round with that.

I hope crytec is working to have each perform to the strengths of each console, and not paying attention to this supid fanboy war.

'' (From his comment history:)Im getting sick of this tsunami news. All the games are being delayed!!''

Who cares? People are dying, being homeless, and such. and you only care about the games? Piss off men

I loled. Your telling me the jaggies on the PS3 dont ruin games for you?
I am kicking myself for getting DCUO on PS3 and not on PC for this very reason. Although i hear the populations are much higher on PS3.

Lets's just wait for the head to head.

"I already knew this. The PS3 is such a powerful console. I knew crytek wouldn't dissapoint."

Lol you didn't know anything...

I never really understood why people didn't like the Crysis series. I don't know if it's because they never had a PC good enough to play it so they downplayed the videos of it, but the gameplay was always top-notch to me. People put way too much effort into trying to flop it. "Buwahahahah look at the physics! HHAHAHA does this map have 100 lights? It doesn't? KZ3 all the way!".

Crysis is fun as hell, Crytek should've worked on the Predator games because that's exactly what I feel like when I play it. Going stealth and then seeing the guy creep up close to you like they see something, unstealthing into a choke hold and throwing them across the screen and shooting them while they're in the air like Desperado. You just have to be creative...if you just play it like COD then of course you'll get bored.

Ok, so the graphics are good. So what? The gameplay is still boring and uninnovative so why would I want to buy it?

Shadow while cloaked is priceless.

Looks close to the PC screenies shown previously. Always looked like that...

so how the gameplay compared to other shooters?

The gameplay is very very good.

The Cry2 MP gameplay beats COD by a mile and for one simple reason hit detection. Even though Cry2 and BlOps both use P2P instead of dedicated servers, Cry2 feels a lot more consistent and reliable.

This is how it is

Gameplay? Blasphemy! Graphics is all that matters this gen!

dude you say the exact same thing on every crysis 2 article stop spamming....

I really, really love KZ3, but I think I might be adding Crysis 2 to my collection really soon, my reasons are simple actually:

1) Open-type/Choice gameplay: You choose which route you take in a mission, you could go over a hill and flank them, take the stealth route on the left, or go tank, and go straight up the middle. In Killzone 3 and 2, everything is scripted, everything.

2) Story: I have to openly admit that KZ3's story could have been much, much, MUCH more than it was, and it's a shame, because if you check here, there's alot of story they could have used. I am interested in Crysis' story as well.

3) Art style: I like the minimalistic techno look that Crysis has going for it, rather than the much more gritty look Killzone 3 has. I am not saying KZ3 is bad in anyway for it's art style, just saying that the two games differ dramatically, even though they're both the Near-future FPS games.

4) Not cluttered: No matter where I played in KZ, online of off, in the snow covered arctic or city, everything felt like there was TOO much going on, not bad, because it shows how technically impressive Killzone is, but it made me feel scrunched in, and didn't help the feeling of linearity at all.

All of these reasons give me a reason to own both, I am selling my bad company 2, and only keeping medal of honor for the BF3 beta, then I'll be playing portal 2 for a looooong while.

Aren't you comparing it to the Killzone3 also?

Honestly at first I was totally going to pass on this game, but what I have seen lately makes me want to play it. My only problem was I could never get on to the demo, I really hope the multiplayer works well it looks awesome.

Crytek confirmed that the Singleplayer campaign & Multiplayer are being developed by two seperate studios..

So, The Multiplayer might not look as good as this footage of the SP campaign..

I see you have completed it on another post. I only care about the campaign. How is it length wise?

@starcb Battlefront 3 got canned a while back. Sad faces all round.

the mp is being done by free radical.

Weren't they working on Battlefront III?

If that's the case then it's a shame that Crytek UK didn't do as good of a job on multiplayer than with their previous titles (Timesplitters).

Are you guys retarded. The mp is only designed by crytek UK (free radical) They didn't create a new engine. It'll still be the same engine as single player with toned down post processing. I swear they need to start giving IQ tests to people who buy computers and internet connection subscriptions. Like to everyone in the household besides toddlers. The internet would be a much better place. There are so many ignorant and uninformed people on this site it makes me dizzy. If you don't know the absolute truth about something don't post it...and the 360 and ps3 will be sub-native 720p with the ps3 a little lower in horizontal res than 360. Both version will be vertically 720 resolution.

Blacks Ops is made with the same engine from MW2 but it still looks worse,

I can create games that look completely different in terms of graphical finesse on unreal engine...what's your point? look at mods for PC games, same engine, some look better, some look worse.

Glad to see everything settled.

I'm most interested in the resolution. Any word on that?

Edit: You said "word"...that was the best and fastest word I could come up with.

Right, we don't need gaming portals or communities as you can google anything. I was asking if, maybe, they changed the res in the final build.

I agree. I have seen the xbox 360 and PS3 version and the PS3 version looks better. I am still amazed on how awesome the graphics are on the 360. Pc still looks the best.

LOL look at disagrees, just having some fun....lighten up people :)

So was the person who approved that build to hit PSN blind?

I'll believe it when I hear it from a site that doesn't sound like the domain was made by a couple of kids.

Actually, it's Crytek I'm more inclined to believe, especially over someone with as big a chip on their shoulder as you seem to have.

Why do people keep saying things like this? That guy from IGN saw the multiplayer portion of the game and he saw what most of us saw, the PS3 version was lagging behind the 360 version.

You don't compare them, because they are demos, it's a cheap troll bait article, and now they look like biased idiots. So yes IGN just pulled an IGN that's why the whole industry hates them because they make there bias so obvious.

Yep, he saw the footage and, even though he knew it was a demo, jumped to conclusions and assumed the worst knowing full well it would, ultimately, achieve nothing but flamebait.

So the people who used common sense and said 'wait and see' for the retail version were actually right?

Yea I know right...I was saying this the past month but people are stupid and believe anything someone says as long as it starts an argument.

"still want it and to me mp demos dont ever play as well as the retail release. i know the diff between a beta and a demo but kz3 beta played horrible but the actual game played better. crysis2 demo is fun for me and i like it so whatever"

....but people will be slaves to the opinions of gaming 'journalism'. all you see here is something popular being repeated by users who fail at critical thinking but will disagree with others who dont. not to mention blind fanboyism. its funny

true that man...you hit it right on the head

I'm really starting to consider this game.
=)
Homefront doesn't seem to hit all the right marks for me, so it looks like Crytek might get my money.

Not surprised that most of the negativity was BS.
Not every day that a dev says "you will not see a difference".
IGN fail.

the only thing ign has done right in the past couple of years was post that black ops charlie sheen winning video a couple weeks ago.

Anyone figured out why the PC and PS3 versions have a fluid moving HUD and the 360 one has the HUD solid in place? Is there a reason?

There's an option to turn off the bobbing HUD in the menu, if I recall correctly.

Cool, thanks for that. Always seemed a bit weird - I knew there'd be a reason for it.

The point of the bobbing HUD is to make it seem like it's detached from the screen, and rather actually inside the mask/visor you wear in the game.

More reason to pick it up when it hits the bargain bin. Not interested in sp of the game.

Meant to say not interested in mp. Campaign could be interesting though.