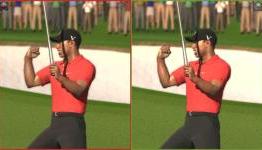 Lens of Truth writes "Welcome back for another exciting HD screenshot comparison! This time we head out for a day on the links with the Tiger Woods PGA Tour 12 Demo. This demo was released on the Xbox 360 and PlayStation 3 just this past week. If you love Golf games, this is the title you want to pick up - but which version should you be getting? Have a look at our latest screenshot comparison to help you make your decision. Four!!!"

Yea, LOT does almost everything. Can't wait for their Crysis 2 analysis. Fanboys Engaged.

Is it just me or does the PS3 version have more foliage on the trees?

it also has more contrast.

The blacks are blacker and the whites are whiter?

yes, thats contrast. and yes i get your joke, lol

Is it me no not me the people watching have nice blend of colord shirts on the ps3. but looks like they did a White job on the 360.? (DAZ)

it seems to be softer. 360 seems crisper. probably prefer softer as it looks more lifelike given neither even come close to real life

PS3 has 14 skanks cheering for Tiger in the gallery while the Xbox only has 13.

we certainly know which version seems more realistic then

3rd image down, keep moving your mouse on and off....

More fun than the comparison.

Idiot#1: "Clearly the PS3 version looks way better cause it only does everything and I own one. PS3 FTW!!!"

Idiot#2: "Without a doubt the 360 version looks so much better because the ps3 sucks as much as it's fanboy cry-babies."

Why people care about which version has that extra pixel is beyond me.

I think they look the same - except leaves are more defined on 360, yet fuller on PS3.

Does it really matter?

you know that other one looks better

I wanna see these guys do this but then switch the labals of PS3 and Xbox around wonder if the comments will change :P

Close enough to make no platform feel let down.
Great that we will have proper Move support this time.

i fell asleep reading this

The look pretty much the same. Except for the tiny difference in contrast and the slightly fuller trees in the PS3 version.

The trees just look blurrier on the ps3 version.. look at the other comparisons of the grass and what not and you'll see what i'm talking about. There's more aliasing on the 360 version :)

PS3 as more wind through the trees ;)

why we compare screenshots is beyond me. lens of truth my ass, they are damn screenshots. (not that golf is the fastest moving sport)

8 Wii Motion Control Games that Deserve Another Shot on Switch