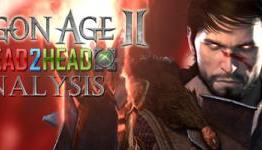 Lens of Truth writes "Welcome back for another exciting Head2Head Analysis! From the time we completed our H2H screenshot comparison last week, we couldn’t wait to dive deeper into this RPG powerhouse and uncover the differences between each version. So without further adieu, let’s put Dragon Age II under our Lens and see which version comes out the true Champion!

BioWare rocks, Thats how a multi-platform games is done. I would however choose the Xbox version for having a lot less screen tearing.

PS3 for me, better overall frame rate and MLAA..

how does the ps3 version have better overall frame rate? look in the video at 1:05...ps3 drops to 12 frames per second while 360 doesn't drop at all. Then when they continue to fight the spiders the ps3 version goes above 30 and below 30 making a unbalance. But the 360 version is consistent at 30 fps.

and anyways screen tearing makes the game look like it has bad frame rate.

@above look at global avg FPS, PS3 is higher and even the LOT article states the PS3 FR is higher but at the cost of screen tearing...

you would rather have 1 more fps rather than the screen tearing? odd

They both look great. You really got to be knit picking with fanboy glasses on to say ones better than the other.
If you have both systems, I'd buy it for the one that I liked the controller for the best. And that's an easy test. Just download both versions and see which one is more comfortable for long sessions.
BioWare should be supported by us gamers for their dedication to making multiplats near perfect ports. They show they care for the quality of their games and us the gamer.

I agree, but I think they're pretty much the same; I bought mine for 360, because I like the acheivment system better and it seems easier to install games on my 360.

It all pretty much came down to the fact that I finished Origins on 360, so I wanted my save to carry over....not that I've really seen anything in relationship to my Origins save, after about 25 hours of gameplay.

Wow MLAA implemented by Bioware, impressive. If I didn't get this for PC already (don't get me started on the DX 11 issues) I wouldve gotten it for PS3

When I first ran the game in DX11 on PC, it was crashing a lot and/or having lots of slow-down issues. Then I upgraded my AMD video drivers and it fixed everything, runs like a dream now. Try that?

unfortunately I have a Nvidia card, we need updated drivers to fix the situation

BioWare knows how to make multiplats. That said, the game isn't graphically impressive on any platform. Not sure why they couldn't even put it on ME2 graphical level at least.

I agree 100%.I like the look of the first one better. Good game but graphically it's a bit of a let down IMO.

Hmmmm. Well this on was VERY close. As for graphics I can't really say one is much better than the other. But I'll attempt to objective. PS3's MLAA is a savior for currently releasing games as it frees up a lot of RSX processing cycles to be used for lighting, geometry, etc , and it's implemented very well in this game. I'm impressed. However, there's still more screen tearing than 360 had and let's just be frank about it. This screen tearing thing that we keep seeing be due to bandwidth being at a premium with the RSX. The tearing would have been much worse had it not been for doing the MLAA on the SPU's in this game. Again, I'm impressed. There's still one thing that I find baffleing this late in PS3's life cycle. "Mandatory" installs. This is still unacceptable. I realise that the blu-ray drive in the ps3 doesn't have the available bandwidth of the 360's dvd drive but, and this will surprise you (But I am trying to be objective), if UC2, KZ2, and GOW3 developers can pull this off then the rest of the world should at least give it a shot. This is a good game to get on either system and shouldn't be missed by RPG gamers looking to have a lenghtly fun filled adventure.

Lol thats funny, I love how sarcastic you are.

Yea, I had a hard time telling, I know how he is, but I couldn't tell if he was being serious lol, maybe scavenging for bubbles, idk

OMG... kids, both versions look the same. that comparison told us as much. I love the "this looks better" or "this version had better overall frame rate" comments... All the comparisons showed that any differences are so slight that you would never notice a difference.

as always xbox 360 version for me

Does one frame really matter when the game is pretty ugly in the first place?

how is this an opinion? they are facts N4G

No, it's LOT's opinion based on their findings using their software. Someone could easily look at these findings and conclude that the PS3 wins because they think AA is more important, or like the editorial notes at the end show - someone could like the 360 version better because for them torn frames are a deal breaker.

This is LOT's opinion based on their own findings. If you think facts are whatever a website run by 3 or so 20 somethings tells you, I don't know what to tell you. I'm not saying LOT's findings are off, I have no idea, I'm just not as quick to label something as "fact" without some sort of corroborating evidence.

so you think ps3 is better? go figure. with a 3.5 gig install the 360 without an install loads the same, doesnt drop frames and doesn't have massive screen tearing. ya know your an idiot if you think the ps3 is the better version.

They seem to reach the same conclusion as DF. The PS3 has better AA and framerate but it has screentear issues. And since i dont really care about tears its the PS3 version for me because of the slightly better frame rate and AA.