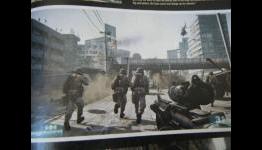 ps3blog.com writes: "Just got my new Game Informer in today.To say I was surprised would be an understatement. Take a look at these pics, they will blow you away."

I really hope these games beat the hell out of the Call of Duty franchise...

Not going to happen. Anyone that has a copy of Medal of Honor will be able to play the beta. It's not exclusive to any certain console.

For getting medal of honor it mentioned the battlefield 3 beta does anyone know how to get it? Is it just for having moh or what?

Cant wait for some gameplay videos

BF3 looks and sounds absolutely amazing simple as that. I mean wow, being able to destroy a 7 story building and have it collapse to the ground... *boner*

everyone, you can find the full scans here, no crappy cellphone photos

day one on PC
cant wait

Exclusive beta test? Are you stupid?

We already saw what happened with COD: BO when they dont do proper beta test on all consoles -.-

Thanks for linking to pics of someone who actually knows how to use a scanner!

I second that ... I can't wait to play it. I am waiting patiently to get my next issue of GI.

What im really excited about right now
In the second picture, the one that says "power tot he pc..." on the bottom right corner...
that soldier is firing left handed!
PLEASE BE A LEFT HANDED MODE FOR GENETIC MUTANTS LIKE ME!!

I hope we get some shots that have a bit more personality soon. It doesn't seem like those pictures really tell us enough about the game. I was hoping for something more signature (though the last one is good). I can't wait to see the vehicles and destruction in action.

All in good time, the suspense is killing us all =P

Ya this is one game to get on pc. Ill probably end up getting this on ps3 as well to play with friends.
anybody know the specs needed. I might need to upgrade to get the full benefits :(
the one thing I hate about the pc is devs don't fully optimize hardware so if you want the best possible experience you have to upgrade every 2-3 yrs.

I'm hoping they would have dedicated servers for ps3 but knowing it always has to be equal on both consoles that won't happen.

THIS IS FAKE AND ITS NOT A GAME!! ITS ACTUAL PHOTO!!!!

Its really hard to tell on the internet....

WHY DO YOU TYPE IN uppercase LETTERS ALL THE FREAKIN' TIME?!?!?????? QUIT SHOUTING!

$63 with tax in Connecticut.

what, we get 9.5% tax in washington. you guys are lucky

I really wish these were actual scans though since these pictures are pretty low quality. Nevertheless, game looks sick!

This looks sick. I hope the console versions don't get too gimped. We'll have to wait and see but if they can pull this off, it's devs like this and CryTech who really punch some gaping holes in the theory that exclusive = superior.

It's official! EA and DICE keep on bringing and improving this superb shooter while Bobby Kotic and Activision keeps on giving your cheap half assed ports with nothing but reused material. I know where my money is going!

Looks schmooks......One question for ya DICE.....can ya go prone in Multiplayer?

yes you can go prone in multiplayer

finally a pc game that looks far better than crysis. good looking games up till now have only looked arguably better.

Scan is sh*t, tells nothing.

Not to burst anyone's bubble, but those screens are touched up. Just like the screenshots of BF2 were back in the day.

Woooooo!! RIP all other online shooters the king is back!!

played the Beta. killzone 3 sucks, which im disappointed because i believed all the hype until now.

1. connection. only played for a day before not being able to connect. not only one experiencing it

2. spawns are worst then even Call of Duty, never thought it would be possible. You spawn in the exact same small room all the time. All i did was cloak hid in their spawn then melee them

3. besides the top notch graphics (which isnt that impressive when you take into account its 2 guys and a wall), it does nothing new. Gameplay is Basically a rip off of call of duty and team fortress 2 and still failing to emulate what made those shooters great.

if you mean king of Broken online shooters then yes BrokenZone is tied with COD.

bah!... you guys can go crawl in a hole somewhere....
the killzone franchise is one of the most unique shooters out there (the immersive perspective, weighty feel, awesome visuals, and universe all just suck you in and set it apart)

that being said im not a stuck up moron.... i am just as eager to throw down on any new battlefield game as i am killzone.

@SJPFTW: It's a beta, not a demo or the actual game. I didn't find anything wrong with the spawns. If you're a spawn camper then I pity you. One of the reasons it plays like COD is because people bitched about the weight of the controls because it didn't play like COD. GG listens to there audience and gave them what they wanted, not what GG wanted.

I hope this is a true BF2 sequal, i really hope its fuck all like COD, i really wanna see gameplay before i get my hopes up.

Looking at these images it kinda brings me back to when I saw battlefield 2 for the first time, had so much fun with that game.

Looks really good from the scans, I cant wait to see footage as well as get info on the incoming beta.

Why can no one properly tag articles on this website....

How do you leave the PC channel out of Battlefield 3 news?

Because console fanboys think its going to look like this when the retail code finally shows up.

Who's to say it won't? Have you played both versions?

Considering it doesn't look better than KZ3, its probable.

I can say unequivocally that yes, this does look better than KZ3, judging from about 2 or 3 of those shots.

Will it look better on your console? Probably not, but on the PC it will certainly trump just about every other thing this year.

I love Killzone, everyone knows that, but you guys have to be blind to think Battlefield 3 won't look better, at least on pc.

"Because console fanboys think its going to look like this when the retail code finally shows up."

Who exactly are you talking about? I don't see any comment on this page that suggests that. This article was submitted by a single individual. Perhaps your comment should be directed at Rikitatsu, seeing as that person is to blame for leaving out the PC tag; not the "console fanboys".

Lol, Killzone 3 barely looks any better than Killzone 2. If you don't think Battlefield 3 (at least the PC version) will look better than those blurry, washed out games, there's something wrong with you - and it's a bad case of "Fanboy-o-vision"

Edit, thanks to whatever mod added the PC channel in after the fact :)

This is a blurry camera shot of a magazine, and you guys are saying it looks better than Killzone 3. Yea that makes loads of sense :/ And how do you know that this will look better than Killzone 3? Nothing has been released yet, but you guys make these ridiculous statements. Killzone 3 is an amazing looking game, and certainly does look much better than Killzone 2 for that one guy who thinks it doesn't. The most important thing here is that PS3 owners have the option for both, amongst many, MANY other games out there.

I don't need to play bf on console to know that a PC W/Directx11 is going to look better, perform better, have more players online & better mods.

History has always proven console fanboys owned, when it comes to developers showing bullshots of PC code up until the demo lands, and idiots try to say "buh its just early code..' Why morons never question the code used in the screenshots and video captures thats older & looks better, is beyond me. Theres no console retail game that trumps its PC counterpart.

Thats why I know.

Its going to happen again for Rage/Brink as well. As its happened for Metro2033 "ZOMG LOOK AT THOSE GR.. wait, whats this shit on the console?!? Why doesn't it look anything like anything shown.. buh the developer videos had the console buttons on the GUI."

U guys get played every year. Same shit.

I game mostly on my consoles, but I have the sense to know that retail release wise, the PS3 has the most advanced engines out. But they are still a huge step down from the PC.

BC2 looks better than KZ3 multiplayer beta to me, yes I have both and have played KZ3 beta quite a bit.

I don't know why BC2 isn't mentioned when talking about graphically amazing games..it's probably the 2nd best looking game I've seen on PC, only behind Crysis with it's jungle setting