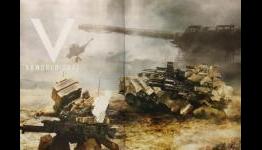 Thanks to stalwart Japanese gaming magazine (of questionable moral integrity) Famitsu, we finally have some new shots of From Software’s robot action game Armored Core 5, albeit rather blurry ones at that. If any of you out there had forgotten there was another Armored Core game in development in the first place, I honestly don't blame you; It’s been over a year since the damm thing was announced and we’ve had practically no footage, pictures or information about it since then. Originally it was supposed to come out in late 2010 but got pushed back to the highly tentative release date of “at some point in 2011” possibly due to From Software’s continuing involvement in resurrecting their much loved Another Century’s Episode franchise.

Adhttps://store.steampowered.com/app/1488200/Symphony_of_War_The_Nephilim_Saga/?utm_source=n4g&utm_medium=native&utm_campaign=sow_n4g_native&utm_content=png
- Comments (0)+ Comments (0)
TopNewestOldest
The story is too old to be commented.
120°24

Why FromSoftware's Next Game Should Be Even More Exciting Than Usual

'Elden Ring': Dare To Be Different