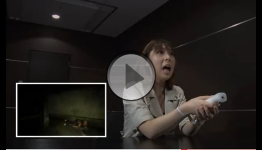 Hell Descent: Saya Hikita, a Japanese bikini model was subjected to playing Night of Sacrifice, and her response can not be real. She must double as an actress as well, because her performance is too over the top to believe. Saya is left in a dark room with this horror title, and the results vary from crying, to looking like her soul took a beating after a life time of misfortune.

... after having been to Fuji-Q park in Japan and seeing how many visitors reacted to the 'horror-hospital' (or whatever it's called), and also knowing how many gamers feel about playing certain games in the dark (my neighbour scared shitless many years ago when he played Silent Hill), this doesn't seem all that strange...

i dunno...her actions (controller wise) and the video didnt exactly match up, there looked to be some times where she was supposed to use the motion control to look down at the door to open it (cause i assume the one joystick only handles movement, not aim), but her hands remained still

it was convincing for the first half, but at the end, the acting was too much and gave it away, ESPECIALLY the blank dead stare, and then sudden scream while it went to a static screen at the end...it was kinda like how "paranormal activity" ended, convincing all the way through, until it was ruined at the end (cant believe a lot of ppl still believed it to be real tho, i mean with a day and age where so much info is available online especially imdb.com, you would think ppl would research lol) but this is beside the point

stick to the bikini please...

She looks like she's crying for another reason, rather than being scared of the game. Look at some points; she seems bored and tired (her interest wasn't there, she wasn't pulled in like those other horror games) and when she starts crying, she covers her ears and head. As if she's reminded of something of her past and playing this game triggered those awful memories. So, in a way, that means the game didn't do its job but instead effect her in a personal manner.

Kinda screwed up, if you ask me.

japanese women are easily frightened, but heck no it didnt look scary

First ever Night of the Sacrifice screenshots are...bizarre

New Night of the Sacrifice Trailer Looks Creepier Than Ever

Night of the Sacrifice Screens