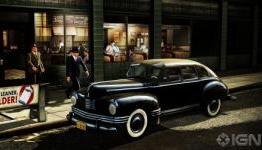 impressive, cant wait to see some gameplay, hopefully its stunning

yeah, it is team bondi + rockstar games = this has to be stunning game :)

Kinect doesn't have lag and it would more than likely be hybrid if they did decide to use it. Very impressive hardware and software for no buttons.

OT: This game is looks stunning.

Rockstar is the publisher, I dont think they have any creative input. This is Team Bondi all the way.

was the lead console PS3?

who gives a shit.

who gives a shit! Those of us who love R* games but hate crappy ports.

And yes, as far as I know the PS3 was the lead console, since the game started out as an PS3 exclusive

i personally hope that there were two different teams, trying to get maximum of each console

@the_best_player I think the PS3 was lead console for RDR, but this game uses very nextgen tecnology so my guess is it will not matter which is the lead console because the engine should be more than capable of getting the best out of both. They could actually have a Kinect element with this game because there own tec uses facial recognition, so when they do a scene it plays out in real time.

@tudors
Would not work with the Kinect lag and we are yet to see anything amazing from Kinect, shame milo was a lie lol.

lead console does not matter, ghostbusters was lead on ps3 and that came out better on 360, somehow.

best player I salute you for being such a giant douche

i agree it does look better im guessing they're using an updated mafia 2 engine.

People keep saying this, but anyone who has closely followed this game would tell you it's nothing like Mafia.

This game is looking VERY classy. I love the color palette, camera angles, and lighting Team Bondi is using.

This game rocks in the graphics department :) facial animations kicked ass and nuttin' wrong with these pics either. Just hope gameplay and story match up....

How about some GAMEPLAY for a game that's apparently coming out in 2 months. We haven't seen a single thing. All they show off is how they can video record peoples faces and their software automatically converts their faces into the game without them having to actually do any animations or anything. Sure it looks impressive but it's not like the art team actually did anything to make the faces look that way... No offense to them, the rest of the game looks fine, but they seem to be boasting about the fact that their tech does everything for them, big whoop.

It really bothers me that they are trying to give Rockstar credit for making this game. It also bothers me that they haven't shown any gameplay this close to release, yet they want people to pre-order it. That shows they don't have confidence in the game and are just trying to release it (probably because it's been in development so long and has cost them so much money) and get people to pre-order/first day purchase it without showing any of the game so they can get some of their money back. And it seems to be working...everyone on here seems to be convinced that this will be the greatest game ever made yet they haven't shown anything about how the game actually plays, only the facial stuff that the tech automatically made for them, which doesn't show off the talent of the actual studio (if it has any, since they are completely unknown). Part of me wishes this game will suck so all these stupid people will learn not to over-hype a game based on a 1 minute trailer and get burned when they pre-order, but part of me wants it to be good because it's an interesting concept for a game. So far it's a big question mark for me, as it should be for everyone else.

Every trailer they have shown is game play.

No, every trailer they have shown is in engine. There's a difference. They are all cutscenes. We haven't seen any actual person playing, running around, controlling the character. We have no idea how the game actually PLAYS.

There not cut scene's, that's what your playing.

The Only Remake We Need Is L.A. Noire