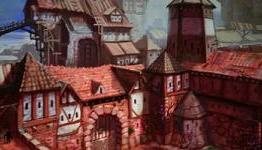 SOE hint at Everquest 3 for PlayStation 3

Sony Online Entertainment has hinted that the next version of Everquest may make an appearance on PlayStation 3.

Agreed. I'm interested in seeing how DCUO fares on the PS3 - kind of a 'test case' for console MMOs, I guess.

Do they really need to take it easy? Everquest is an established franchise. This could be a good way to get more MMO players on the PS3.

Final Fantasy XI has been 'testing' MMOs on consoles for 8 years.

I've been waiting for this 3 years now... Yes please!

Why sir, i'd say it's the MMO console king.

EA not only loves consoles, but EA seems to favor the PS3.
Bioware doesn't, but EA is the new sheriff in town and pretty much calls the shots for them now. Good, because businesswise, Bioware isn't all that bright, which is why EA owns them now.

Hopefully though, we get that mouth watering announcement from NC SOFT.....

I would love this. Everquest is awesome.

I would start playing MMOs again if this happens.

EverQuest was... epic. WoW was fun for a while afterwards, but it just never had the same spark of awesomeness.

I don't think I would ever play an MMO on console. I just don't "get it" I guess.

Horrible idea. To get EQ2 to run good at a decent resolution you need a pretty good video card. The PS3 won't be able to handle EQ2 let alone EQ3 unless they seriously dumb it down. Cities with huge amounts of players would run like a slide show on PS3.

*EDIT* @ below:
I'm talking EQ. Besides, people on N4G are saying there's slowdown and choppy framerates in the PS3 version of DCUO

Every MMO has issues when they first come out. How many patches have come out since WoW came out?? These things will be fixed. If they have the same issues a year from now in DCUO then you can blame it on the hardware.

@ElementX : The last time I remembered EQ2's engine was so well made(sarcasm) it was CPU heavy to render visuals. They could easily port EQ2 to PS3 with it's Cell. The problem would be memory in this case, but game developed from scratch would run like butter.

Saying the PS3 couldn't run EQ2, a 2004 MMORPG, when there are already MMORPG's on consoles RIGHT NOW, and have had them since 2002 on the 300mhz PS2, that's really just disingenuous.

Without doing too much long and drawn out typing, how about I give a fact....Computers that run this generation's games & MMO's, which include low end Single Core's PC's and laptops, those machines are LESS powerful than the PS3.

So in fact, it isn't Consoles that are the LOWEST common denominator of this generation's retail games....PC's are.

Disregard, my edit from above ended up becoming a new comment.

Why you say incoherences?

^Incorrect.
It will be free to those who can refrain from spreading useless misinformation.
I say more power to the people/gamer.
Lirky,you have made it abundantly clear that the Pay/play model irritates you,fine.

I was jokingly stating that its going to be pay 2 play regaurdless which is fine for those who support p2p genre.

I highly support f2p because u dont have the hassle to pay a bill to play a videogame.

Oh my god, do you have to jump onto every DCUO thread moaning about p2p?! Get over it.

I support F2P as well but have no illusions about P2P being the more viable option as the money generated allows for a hopefully better experience and new content/fixes on a more regular basis.
If they ask for 15$/month and the game remains unchanged for 3years,sure,that wouldn't be fair.Neither would expecting a miracle for free then being dismayed when it isn't one.
A good,constantly evolving game takes time and money and resources that don't come for free.
In any case,it is a personal choice so my view is only MY opinion.

Mouse + Keyboard support or I'm not even remotely interested.

all console mmo's supported keyboard, i dont know about mouse as i preferred the controller and keyboard set up.

finally.. there should have been an everquest 2 or even a relaunch of the original on the ps2.

i know a lot of people are still skeptical about mmorpgs on consoles but my first mmo was Everquest Online Adventures for the PS2 and Final Fantasy XI for the PS2.

successful and working incredibly well. Sony failed to see the potential and ride it. Much like they failed to use the socom base and original code to help the ps3's online community instead of looking for the next best thing.

*Reinforces his tinfoil helmet upon discovering that his thoughts were stolen* I'd be fine with another console version of EQ set in a different time frame. I spent many hours on EQOA. Bought a USB keyboard for it that I still use with my PS3. You're dead on with the Socom comment also.

John Smedley on PlayStation 4, PlanetSide 2, and EverQuest Next

EverQuest Shows Up On PSN Store