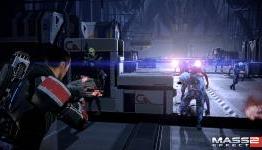 XMNR: Mass Effect 2 finally hit the Playstation 3 last night in the form of the demo. It promises upgraded graphics due to the use of the same engine as Mass Effect 3 along with a few other extra goodies. We took the demo for a test spin last night after downloading it and dove back into the sci-fi RPG tale from BioWare.

I was surprised how the PS3 demo graphically held up against the PC version. The blur is much cleaner and I noticed that the vorcha was more detailed on the demo compared to the PC version.

im still waiting for it to appear in the psn store

did u also noticed the hiccups? not as smooth as i thought it should be.

Yep... reports are coming in that it's not as smooth as the 360 version. Not surprising.

Yeah, it is mentioned in the article.

Edit: You're disagreeing that it is mentioned in the article?

Just played through it a second time, it is def a step up from the 360 version, your obviously getting reports from ppl that dont have a ps3 like yourself.

dead space 2 is better on ps3 too LOL

considering the source I doubt if the reviewer even played the game.

It seems whenever someone comments that ME2 demo on PS3 doesn't have smooth framerates, it gets a lot of disagrees. I played the demo and commented of poor framerates and also getting disagrees.

My opinion is many PS3 gamers have been waiting for ME2 and with the hype of PS3 version has better "graphics" because of ME3 engine, reading someone saying it has poor framerates just don't go well. It's like popping their hype bubble.

Hasn't ME2 on PS3 already gone gold? I do hope the shipping game has smooth framerates as X360 version but I wouldn't be surprised if the main complain will be framerates on the full game when it's out.

heres my psn id buddy DarkOnigenma82 yeah while youre at it enjoy comparing my plat against yours. LOL i have 2 ps3s and 2 xbox360s if you need proof on those as well lemme know i'll take a pic ASAP. kbye

It's funny how they never gave a shit about ME before. In fact, some of them shit all over it because it was a lowly xbox exclusive. Now, the second you mention one unflattering thing about the port, they get all pissy.

Change your tampons people. Just be glad you're getting this game. It's one of the best written stories out there. Which proves my point that true genius and inspiration don't reside exlusively with first party developers.

@Vortex 3D youre not being truthful are you???

It says nowhere in the article its has hiccups... COMPARED TO 360 version.

Get it straight and deal with it ;)

Oh my what will Mass Effect 3 look like on PS3 they got the engine running this well already?

Exciting. And silent PS3 with no disc changing...gotta hurt

@Biggunz: Yeah, aren't baseless accusations fun? I did play the demo on the PS3.

Don't know what you're so upset about as the Impressions article (not a review) is overall very positive.

"Overall, the game is the same Mass Effect 2 that PC and Xbox 360 players enjoyed when it was released at the beginning of the year. The game gets a graphical upgrade courtesy of the Mass Effect 3 engine but there's still the occasional hitch in the engine but nothing that is disruptive to the experience. There is a difference in the graphics between the PS3 version and the Xbox 360 version but it is hard to quantify as to how much. Let's just say that the PS3 version does look better than the Xbox 360 version and looks very clean with upgraded features and character models. It will be enjoyed very much."

This should wrap things up here.

So much for the superior 360 version. But what do you expect they had a year to work on the PS3 version like Bethesda did with Oblvion same thing

Im on the toilet (right now)takin a poop, typin this and smokin a big spliff (multitaskin to the extgreme) and as soon as im done im gonna fire the Massive Effect 2 demo up, im lookin well forward to playin it, i like me RPGs, im just glad i finally get to try it myself

Good to know man. Just make sure you have enough TP.

dont forget to clean your ass

And wash your hands before you pick up the controller

and remember to spray Lysol on the toilet rim.

Grab a Big Mac while your takeing a dump - it enhances the flavor in way you can only imagine.

Hahahaha you guys just made my day

Do you have TP? TP for my bunghole?

And then have a sandwich.

*not to be confused with an actual time consuming shit where you catch up on that Phillip K Dick novel you neglected for months.

Demo looks good but there are a few graphical glitches here and there. I'm gonna wait for the price to go down after it launches and get LBP2 instead.

I was thinking this as well.

Too many games in 2011, single player games can be played anytime with no negative effects, but LBP has a community that you want to see grow from the start.

Ye after i played the demo i thought the exact same, going to get LBP2 and Dead space 2 in January. Will definitely pick up ME2 though when it goes cheaper.

there are framrate issues and on the official bioware forums,they are lookn into it

No way I'll be picking it up at full retail price. It's watered down from the much cheaper, and much better looking PC/xbox 360 version. It has frame rate issues and the screen tearing was unacceptable. I also couldn't believe how choppy it got during the cinematic's.

Bio-Ware should be ashamed of themselves for pawning this one off on consumers/their fanbase.

I beat ME2 on 360 three times. There is a graphical glitch in the ps3 demo when you are waking up to Miranda when the roof goes all funny-ish for a second. This was present in the final version of the 360 game as well.

The engine-based videos in the ps3 demo occasionally have some fairly blatant screen tearing, but I'm unsure if that was caused by compression for the demo, so the verdict is still out on whether this is insignificant or not.

I found the PS3 demo looked better, even if only marginally (it's true guys, it doesn't look that much better, but it already looks great so who cares?). Peak frame rate seemed to be higher, but there were one or two hitches I certainly don't remember being in the final 360 build. They last for about a millisecond though, so it really doesn't matter to me.

All in all, it looks like there are a couple of trade-offs that make both console versions fairly equal in slightly different ways. I can say with certainty that there is no obvious winner here (like it even matters).

I guess we'll see if this demo build is the final build or not, but until then, know that neither version is inferior by the looks of it. BioWare did great by first impression.

Im glad they released a demo for it. I played it and it was very confusing and I just dont like it. Some parts were cool like parts of the cutscenes. I can see why rpg fans would like this but other than that i dont think its a vergy good game imo.

I have not downloaded the demo but will be interested to see how it stands up against the PC version (which I have played to death over the past few months). My PC is no gaming PC but it still looked great.

If the reports above are true re: the variable framerate I will be a little disappointed. By no means does it break the game but there are 4 things I hate when it comes to visuals:
1. Jaggies
2. Object/texture Pop-in
3. Screen tearing
4. Noticable drops in framerate.

When all 4 a present in a game I typically don't put as much time into playing that game. Kind of like bad special effects in a movie, every time you notice them it pulls you out of the story.

They it must absolutely Murder the 360 version... seeing as even the Developers ie Bioware themselves said they improved the visuals for PS3. Its obvious unless youre in denial..and this is a demo build.

You don't need anything close to that to make the PC version run smoothly. I could run it at max at 1080p/ 60 fps with my old 4850 long before I upgraded to a GTX 460. Mass Effect 2 is well optimized and isn't a resource hog like a lot of other games.

Looks Like another fail by lens of truth. These journalists state that the PS3 version is slightly better

A New Appreciation for Mass Effect 2

5 Mass Effect Characters Too OP to be Squad Members