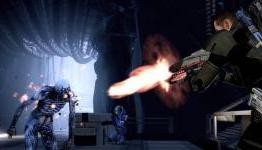 BioWare is bringing Mass Effect 2 to the PlayStation 3. What changes are being made? What added bonuses will PlayStation 3 owners get? And how will the devs bring the once Xbox 360 and PC exclusive story to Sony's console?

brighthub.com
- Comments (4)+ Comments (4)
TopNewestOldest
The story is too old to be commented.

Played the demo and all I can say is simply -- I hope, for the fans sake, this is an old build. It looks rough on the PS3, but I've never seen or played it on the PC or xbox 360, either. Maybe it just looks rough in general?? As of right now, though, there are just too many games on the Ps3 that far succeed it graphically and I feat it'll be over shadowed on the console.

the demo looked great to me...i enjoyed it and i'll be buying it..
also played the dead space 2 and lbp demos as well...and those are must buys also...

Let's pretend for a second the graphics are as you say "rough"
Are we just throwing aside story, playability, fun factor etc?
I played the demo and thought it was fantastic.The soundtrack and atmosphere were top notch. I'll be getting this game along with dead space 2 and others.

I was superbly impressed. Picking this up on midnight launch.

A New Appreciation for Mass Effect 2

5 Mass Effect Characters Too OP to be Squad Members