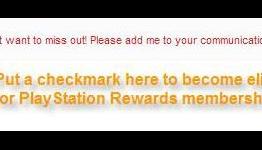 Sony Battles Microsoft with Their Own Tiered PlayStation Rewards Program

Sony isn't letting Microsoft get away with being the only console offering a rewards program. Similar the the XBLIVE program, Sony's PlayStation program earns you rewards for doing things with you console you might have done anyway... like playing a game.

surely it should be linked to trophy level, as well as psn activity.

I wonder how they know whether you purchased a game or not. Looks like their gunna have to track each individual game disc.

The thing is they don't
i recently purchased NFSHP used. For that i don't think they add up at all. I think it's only PSN downloads that raise the bar up, but for me i never played NFSHP and registery trophie it made the bar go up the next night. I think for retail games it's just trophies and firsttime playing them (new games)

I already made it to Select and Pro is next. These are the avatars I got for making it to Select. You also get a theme and some Home items.

Well, I guess if you are the first to rent the disk then as he said below.

Be the First to Play?

This may be one of the most confusing aspects of Rewards. Each software disc that is produced, whether by SCEA or by a 3rd party publisher, is tagged with a unique identification number. To get Rewards credit for a disc, you must be the first to play that specific disc while logged in to your PSN account. Once the disc has been played once, the Rewards system will ignore any further plays of that particular disc.

For example, let’s say that Roger, a Rewards program member, walks down to his corner Best Buy and purchases a copy of Little Big Planet 2. He takes it home, starts up his PS3, logs in to the PSN with his login ID ([email protected]), and starts up LBP2. He has just received credit for LBP2 under his PlayStation Rewards profile.

Now let’s say that, instead of heading straight home, Roger went to his friend Hamid’s house. They log in on Hamid’s PS3 under [email protected] and load up Roger’s new LBP2 disc. Since Hamid was the first to load the disc under his PSN login ID, he would be credited with the LBP2 purchase, even though Roger actually bought it!

Roger would have to purchase another LBP2 disc (or have Hamid purchase one for him) and be the first to play that disc while logged in to his PSN account, in order to get Rewards credit for LBP2

Good call, Apocalyptica! Most of the others on here don't bother reading the print and assume they're getting rewards for renting Barbie Horse Show or Spongebob at Blockbuster!

The way that the Playstion Rewards Program works is simple. Use your system often.

It tracks the time you play play games while connected to PSN. Not online, but just logged in.

It also registeres the trophies that you earn.

When you purchase or download any content, it tracks that too. Of course payed features earn more than Demoes and Rentals.

PSP games are the same thing.

Also be sure to always register your hardware and software through Playstation(dot)com. This adds to it too.

My bar was about to the Friends tab. The I only have play a very little bit of COD, a good amount of GT5, and a bit of Gamefly rented Castlevania and the Bar went from about 40% to 60% within a week. I use the PS3 for everything. I watch tons of blurays (BD Live is tracked), Hulu, Vudu, and Netlfix.

The more you use it the faster it grows, but what you buy into it really shoots the bar up.

I do want to stress that the rewards are on a year basis, so every March it resets. But you keep your rewards forever.

I'm fairly sure that the PS3 rewards were around before Microsoft's version... Considering that I got a beta invite to the program two months ago.

Yeah that would make sense, but I hope they would give away games or something instead of free furniture in Home.

And don't call me Shirley.

That gag was appreciated.

My question is if PS Rewards will overlap Playstation Plus.

Also, MS's reward system is a joke. From Gamespot:

If users fill in a "quick" survey each month, they will receive 20 points (18 pence, or 36 cents). Microsoft has also promised that those signed up to the programme will be able to participate in "exclusive promotions" in exchange for "cool prizes," though further information on the promotions and prizes were not forthcoming."

They are rewarding you in pennies. Literally.

It's going to be a slow grind for those that bother to scrape up and collect. I'd at least think they'd offer a free game every now and then

does anyone know how i can get this??

Anything MS adds to XBL, Sony automatically copies. Wow, Sony can't just come up with their own ideas?

I thought Sony Rewards was first? How long has the Microsoft rewards program been around?

I was going to say this. They said like, 2 years ago that they had plans to reward PSN users who went for leveling up.

Been waiting for a long time, and now HERE are some rewards? For wasting MORE of my money? No thanks Sony. I appreciate it, but I'll have to pass.

Old news, Sony started that months ago for US Only.

And it was published here in N4G Months ago.

Yep. I have been in it since November.

exactly. this isn't Sony catching MS, this is MS copying Sony. they did this months and months ago. please don't turn this into another Eyetoy V Kinect argument again. acknowledge the truth for once

buuuuuuut MS started this over a year ago. October 2009 to be exact. Soooooo....what kind of logic are you spouting?

Its been going for a while now for ps+ and GAP members. From what I can tell its tracking both psn use and trophy activity. When I registered a few games on the site I noticed an increase in the bar, it would be nice if sony would spell it out as to how much certain activities count towards acquiring rewards.

Nice that both companies are giving a little back to their customers.

This rewards program started like a month ago. Come on people, get with it.

I'm in because I'm a Plus member. I'm not sure when it will be released for everyone though. This is just one of those cases of selective memory though. I wish I could find the G4 link because I've looked everywhere, but Sony was talking about implementing a rewards system since the start of 09.

If anyone can find the link, it would be apperciated.

Swear this started over a month ago in the US? I think you should change the opening of the article to 'Microsoft isn't letting Sony get away...'

Nintendo did it first with the stars system though.

FYI; if you use the sun you owe money.

LOL i read about this. Looks like I owe money to this woman for the tan I got in Egypt...

Why do people defend Sony or MS?? they both want you to be broke!!! in the end it's better for them!!

unless your a shareholder or extremely obsessed Who cares??

Competition is fierce, but healthy.

I prefer Playstation rewards because they reward people for the simplest things such as playing games.

cant we all just be friends?

"cant we all just be friends?"

nope sorry. unless MS gets off its ass and ups the friend limit on xbl. like they said they were going to when they discontinued xbox1 support. :)

Its not like anybody is gonna have 100 friends. I mean, even if you do, theres no way you're going to talk to all of them, so what exactly is the point?

I signed up for it and it came before the Xbox rewards.

I love how this story comes out AFTER the Microsoft one, even though the program has been going on for far longer. Take a look at my PSN ID below, for example. I'm almost at the 3rd and final tier of the program.

SO uh, does this include all the PSN things you already bought? like does it look at what transaction you have already made or does it start from when you sign up? I've purchased a lot of shit to the point where there's not much else I'm interested in buying so I hope it all counts :(

also is this in canada?

I believe the title should be flipped, Microsoft battles Sony, Seeing as how playstation rewards was available first.

I know its only exclusive to plus members now, but was still available first.

Brian, you are so correct. This article is "rear"-backwards. I have been in the Sony Rewards Beta Program for months and almost at Pro level already. I laughed when I got the info in an email the other day about MS stating that I could participate in their "rewards" program. Anyways, Sony already beat MS to the punch in this program. This article should be either removed or edited for the truth.

And you are going to laugh even more when you find out that Microsoft were doing it long before that. Go read about it

i looked it on the the site and it says its in beta, what i wanna know is does the games we recently bought like GT5 count towards this when it starts or after?

Of course not...they'd be in the hole for rewards if they had to take care of all of your past "purchases". The program only takes into account all NEW purchases from the moment you start the program. Interesting to note, you can't simply rent a game and have that count...the serial for the disc must be "fresh"...out of the box and into your PS3.

PSN Store and HOME purchases also count towards your totals.

How is this new in any way? It was announced months ago.

I've been in there beta for 3 or 4 weeks but i haven't really done much with it other then enter contest. I'm preety sure sony has been doing there rewards for awhile now but i was late to the party.

Is this coming to europe by any chance?

never heard of the ms rewards but i signed up for the psn one weeks ago..

Yet another copy cat performance from Sony.

i remember hearing jack tretton talk about it when they announced playstation+ I believe.

Agree 0Disagree 0
▼✖-+
SPAMInappropriate
Show all comments (61)
The story is too old to be commented.
60°

With Lightfall's Many Changes, Destiny 2 Needs a New Introductory Quest More Than Ever

Why There Should Be More Hostless Video Game Presentations Like Developer_Direct