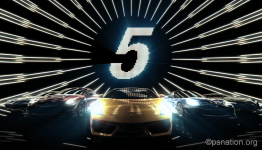 ...the latest 1.02 update for Gran Turismo 5 has just made available for download. 1.02 allows the game to take advantage of Polyphony Digital’s upgraded server infrastructure while enabling maximum power and weight restrictions for online races.

Adhttps://store.steampowered.com/app/1488200/Symphony_of_War_The_Nephilim_Saga/?utm_source=n4g&utm_medium=native&utm_campaign=sow_n4g_native&utm_content=png
- Comments (49)+ Comments (49)
TopNewestOldest
Expand all
The story is too old to be commented.

Yeah I know...what can I tell you...ranked number 1 from my first race! /s

Is this the second patch or the first? I just patched the game earlier, turned it off for awhile, and now I'm being prompted to download another patch. I don't mind dl'ing updates but it downloads so slowwwwwww.

@Lifendz Its the 2nd overall. The first was to enable online with patch 1.01, which was released when the game hit retail. Seeing as some people got the game early, like by a week in some areas (cough France / Europe), they probably didn't want them playing online till it was officially released. Though first actual real patch to fix / add some things.

will11, 2 bubbles so far, nice. And no, you don't represent the GT community, damn troll.

^ You need to get out more.

oh cool... i got the game yesterday... installed it from option menu but it asked me again asked me again to install it after i dnled the first patch. funny... the HD size is same even after installing it again. but good thing is iraced till 4 in the morning... WOOT WOOT FOR THOSE COLLECTOR EDITION'S FREE CARS!! q:

the tests are.... ugh. all i can get is silver (sometimes) n bronze. i am little disappointed by the graphics though... there are some tracks that looks really shabby. BUT there are others that shine! same goes with the cars.

nevertheless i'll be playing it the whole of this weekend. q:

I just installed the new patch and low and behold it actually works. Unlike most devs that patch gaes and they not only don't fix them but sometimes mke them worse.

This game is amazing. It is the best wheel game I have ever played. I am grinning from ear oear. My wife is looking at me like she should gra the phone anc call for help. You know, the guys in the white coat help.

Kart racing is a blast.
Nascar school is a challenge.
Rally racing is fantastic.
Oh well, back to the world of Gran Turismo!

on topic: It looks like the single player 'lag' is pretty much gone, well done guys, cool game!

I love how people think the game is broken.

downloading at the moment...ugghhh the waiting game, so it begins

As an additional maintenance note. Server maintenance will be taking place from 10:00PM (22:00) Eastern Standard Time until about 11:00pm to coincide with this update.

Some in-game issues have been reported, so please completely exit, download and apply the update.

I just disconnected from GT5, I didn't see any new update.

I restarted the game, the patch is available.

Excellent i will grab this just now while I'm up , just been Pml at a little nerd troll braxens pm'ing me like a chick on the rag about gt5 lol kid doesn't even own a ps3

This is the patch spoke about to come out on the 28th, it came out early.

I wish we had some kind of remote to turn these trolls off
On topic: just downloaded the update I have not once gone to the online portion of the game I may just do it tonight.

I know, they really need to bring back the one bubble system fom before. Where you can't read one bubbler's comments unless you really feel like you want to read what shite they are saying.
That's not aimed at anyone in particular btw just in case any of you one bubblers get your knickers in a twist.

wow...
I've never seen a game get trolled on more than GT5, I mean all the troll comments & we already got a fake article that came from a made up website created by a troll for the sole purpose to troll GT5.

Edit: Actually now that I think about it it's probably the same trolls with multiple accounts working overtime.

They trying to get paid lol

Trolling is from the jealousy.
For real. This game curb stomps and other racer I have played this gen on a "console". And to you haters don't make me break out the photo's of all the racing titles I own and equipment I play them on. I have played them all on the PS3 and 360. Bar none this is the most diverse and best FFB wheel game I have ever played on a console.

I never thought I would say that about a racing game,..
I think this is my game of the year,.. I need to go to sleep,..( played 16 hours straight)

In some days we will need 2 million players simultaneously!

Jeez, the admins are slow to ban those troll accounts.

Lost all my efforts.

Such a shame it happened.

Given the date of the post. It seems he failed to read the information regarding the status of the online.

Upsetting indeed, that it happened to him/her.

I wont be stepping online for a while though, simply how I am.

Isnt there any matchnaking or ranking system online? and why can people start the match while people are still picking there cars? the host should be the only one who can start it.

The trolling on GT5 I truly believe comes from jealousy. But the amount of trolling coming in on some of the GT5 posts is astounding. Honestly funny when you read most of them though.

This update rocks! Smoother menus and the online portion is waaayyy better :D

There's 20,000 more patches coming. So be patient everyone. I also noticed the cover of GT5 was chipping so I scratched the front of the GT5 cover and it said patch me edition. GT5 patch me edition. Imagine that.