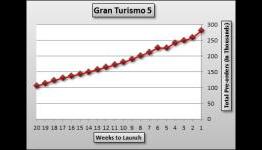 "Overview – Four different games are in there final week before launch, with two of them for multiple platforms. Eight games in the top 30 added 10,000 or more new pre-orders this week. The top five games have 100,000 or more pre-orders and the top 17 games have 50,000 or more..."

Clicking on the gamrfeed.vgchartz.com + link below the Read full story link will allow you to mark vgchartz as a bad site so we don't have to put up with fake sales numbers from this garbage site anymore.

but I like vgchartz. It lets us know what's hip and what's not.

It looks like Gran Turismo 5 isn't going to be the huge seller everyone expected it to be. It won't be able to compete in sales with titles like Reach and Black Ops this year, even with strong sales in Europe. It must be pretty disappointing for GT5 fans. A game in development for this long with such a huge budget deserves far better sales.

And you've got to think about how long this game has been on the horizon. Release dates came closer and then the game was pushed back multiple times. So many of those preorders may no longer convert to actual sales.

Wow, those numbers are pretty surprising. I know so many people that are crazy excited for the launch of GT5.

But then again, the racing genre as a whole isn't quite what it used to be. The genre needs a game like GT5 to come out and hopefully re-spark gamers' interest.

Your comment is everything that is wrong with people who call themselves gamers.

"It must be pretty disappointing for GT5 fans. A game in development for this long with such a huge budget deserves far better sales."

Sure fans want the game to sell well but if it dosent why would they be disappointed? Do sales affect gameplay?

There you go playing the sales game again, when will you ps3 haters get off it? Gran turismo is going to be one of the highest selling games of the year regardless of what "PREORDERS" look like.. In fact uncharted 2 only had 188,000 pre orders the week prior to launch and whent on to sell 4 million copies world wide.. Pre-orders are only good at gauging how much hype is being generated in the media and that is all... I predict 500k-800k first week sales in north america for gt5...

Your Uncharted 2 example is flawed compared to your whole argument. You are talking about highest selling games for a given year, yet you bring up it's maximum lifetime sale. Uncharted 2 sold around 1.5M during 2009 when it was released.

Also, I highly doubt 500k-800k in the US. GT5 Prologue had a debut of approximately 400k a couple years ago. The maximum I see for the game is 400k to 550k (your lower bound estimate) based on Prologue's debate and historical releases for racers (Forza 3's release and NFS: Shift's release). But, I do believe that the game will sell like hotcakes in Europe (those fanatics). We can definitely expect 1.5M to 2M copies sold since Prologue debuted with 1M-1.2M sold a couple years ago.

So, all in all, we can looking at 2M to 2.5M copies sold, which is the strongest debut for any exclusive racing game.

GAHAHAHA...wow I was wondering when someone would bring up sales as a parallel to game quality.

"It must be pretty disappointing for GT5 fans."

HAHAHA why would sales numbers matter to fans other than online racing opponents.

I don't preorder games anymore. I preordered KZ2 and when I went to pick it up day one. There was at least 30 copies sitting on Best Buys shelves.

I'm definitely picking up the game tomorrow and I think Best Buy will be heavily stocked. IMO preorders are a waste of time. But thats just me.

I agree the only reason I preorder games anymore is for bonus stuff. Or like the CE of GT5 I knew it would sell out before launch so I pre-ordered in June or July(can't remember) when it was first announced.

lol i agree, the pre-orders of GT5 are pathetic IMO.

There is no virus threat you contributors abusing your privileges.

Why even post this shit anymore? Its obvious they just guess numbers up.

Estimates are educated guesses, am I right? I don't see the issue here.

EDUCATED GUESSES are done by people in the industry who have access to hard data and contacts in the industry can verify said data. the companies you say to represent also recognize you as a fellow colleague.

vgchartz has none of this.

i could start a site and throw out a so called guess. doesnt make it right.

matter of fact, developers, publishers etc have all participated and commented on the neogaf forums. vgchartz was run off of neogaf and aarron greenberg even recently came out and said that vgchartz has no access to data to make up such guesses.

10 Most Underrated PS3 Games You Should Play

Hogger's full Heroes of the Storm talents and abilities revealed

What Comes Next for Donkey Kong? Making the Ape a Priority!