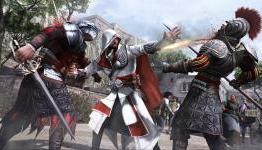 "There has been quite a bit of dissent in the camp since Brotherhoods announcement. Some declared it was too early for a another game, others that multiplayer would not suit the series and that it would compromise the single-player element of the game. The good news is they were both wrong, Brotherhood delivers both fun multiplayer and a chunky ten to fifteen hour singleplayer packed with refinements. Oh, and a tank."

Adhttps://store.steampowered.com/app/1488200/Symphony_of_War_The_Nephilim_Saga/?utm_source=n4g&utm_medium=native&utm_campaign=sow_n4g_native&utm_content=png
- Comments (0)+ Comments (0)
TopNewestOldest
The story is too old to be commented.
160°14

Assassin’s Creed multiplayer confirmed by Ubisoft from For Honor devs