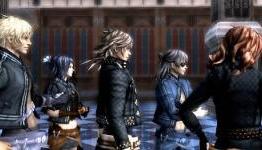 Another mystery staff member was revealed in the latest Iwata Asks column for The Last Story today. Just as surprising as it was to find that the upcoming Wii RPG was directed by Hironobu Sakaguchi himself, how's this for a surprise: the game's music is being handled by Nobuo Uematsu.

So much talent wasted on a game for the Wii. I bet that outside of Japan this game is not even going to sell half a million copies... Why do Mistwalker hates the PS3 so much is beyond me but if they really wanted to make some money the PS3 is their only choice. Not only the core gamers from the west would support the game much more than the Wii owners but the sales on Japan would be equally good so it would be a win-win situation.

Just look at Star Ocean IV, even at full price for an old game it sold twice as much than its X360 counterpart.

I dont think the talent wasted at all. As a matter of fact, the creator said if he had made it for HD; he would of care for keeping the graphics looking great while maybe failing to keep the story in place.

Nobuo Uematsu has so far done the music for ALL Mistwalker games I believe.

Sakaguchi and Uematsu are close friends I believe it would make sence for Sakaguchi to commission Uematsu's studio to produce the music for his RPG's.

I'm also puzzled by this lack of PS3 support.

It could be that the reason Xbox has the games that it does is because Sakaguchi's studio was backed by Microsoft Game Studios when Sakaguchi founded it. Naturally you want to show support for the people that support you with co-productions. Nintendo is currently backing this "the Last Story" as well as publishing it. Perhaps if the Last Story is successful the studio will be able to grow to the point where it can devote more recourses to "next gen" consoles. Baring a possible backing from Sony, it would cost the studio on it's own a lot of money and man power trying to make a full-game for Sony's black behemoth, the PS3.

what did I say wrong? XD

Looking forward to more of his music

The Wii is 15, so here’s 15 Wii games that deserve Switch ports or sequels

Five Wii games that should get a Switch remake