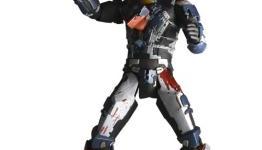 Hell Descent: Available in January, Dead Space fans can snag this action figure of Isaac, movable arms and legs, for an as of yet unknown price. Seeing as how its just an action figure, probably around twenty to thirty dollars. But who knows, maybe it’ll catch a case of the internets and get really expensive. Also in the same month, a Necromorph Slasher figure, the most common enemy in the first Dead Space, with the horribly disfigured arms, will be available for purchase, although we have no idea what it will look like at this time.

No Thank You. TBH, looks quite horrible. Looks like a power ranger reject. I think I'll stick to my Plamsa Cutter Replica.

Each Call of Duty Developer Should Embrace Its Own Style

Build On the Back of Giants in The Wandering Village | COGconnected

Battlefield Discord Not Handled by DICE and EA Anymore, Once Again Ran by Community