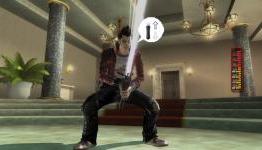 No More Heroes led a series of unique and alternative experiences offered by the Wii when it released in 2008. The story of Travis Touchdown’s quest to survive the streets of Santa Destroy in order to rise to the top of the United Assassins Association, if only to get the girl, represented a wave of punk sensibility rarely seen in the industry and also exclusive to Nintendo’s console.

Marvelous Entertainment broadened the chance for PlayStation 3 and Xbox 360 owners to share in the bloodletting with the Japanese release of Heroes’ Paradise this year, and many of us have patiently waited to learn which publisher might plan to bring that HD love our way.

The first game was great, I can't wait to see it redone on the PS3.

that they are working on the load times and adding stuff to this version.

Up Up Down Down: No More Heroes

Characters with Character: Travis Touchdown from No More Heroes