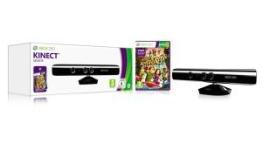 CVG writes: "My left thigh feels as brittle as an old codger's elbow. My sardine-sized triceps throb like pre-teen adrenal glands enjoying an audience with Justin Bieber. My Trapezius is stiff enough to suggest someone's furtively injected super-glue under my shoulder bone.

I'm also suffering from other, less physical inconveniences: The aftermath of the incessant banging on my ceiling from the sleep-deprived curmudgeon in the upstairs flat, for instance; the spilled Robinson's stain besmirching my living room carpet; the fact I've had to look up 'Trapezius' online to work out which muscle is causing me jip."

Surprised these guy scored it this high. I guess the score will depend on the amount of bias you have feel, taste and smell like which is usually what they are already use to.

Sorry to burst your bubble but you also need PlayStation Eye to use it. And Kinect supports 2 players which forces you to add another Move controller. I'm not trying to troll or anything but if you don't like Kinect, at least try harder not to look biased when commenting about it.

How does Kinect supporting 2 players force you to buy another controller?? It doesn't.. stop trying to justify the price.. That terrible.. Also Kinect can't even do more than 2 players for the price I expected at least that.. You want 4 players?? That's 2 consoles, 2 subs to live and 2 Kinect thank you very much! I have 3 kids who I play games with so the fact is Kinect is no good for me as I cannot play with them as they hate waiting their turn. Plus my room is too small anyway.

also gigaware go away all the Kinect threads you been banging on about how Kinect scoring higher and laughing then come on a thread where it's not and called them biased?? CVG are pretty much a reputable reviewer as they run a magazine etc.. So have to be. Unlike Destructoid lol

Who said I'm trying to "justify" the price. As a hardcore gamer, nothing can make me buy Kinect right now because of its price tag and launch titles. I'm just saying that the guy is obviously biased when he says Move only costs 35 pounds. Yeah it does cost 35 pounds but if you don't have a PlayStation Eye, you won't be able to use it. And the thing you are just ignoring is, Microsoft is going "only" after the casual market with Kinect by using a completely different approach. You said you have 3 kids. Show me more than 5 retail games that supports Move which lets playing with 4 players at the same time. There are, what like 2 titles right now? And if you're not staying 2-3 meters away from your HD TV, then there's no reason to buy neither Kinect nor Move. Most of the HD TV's require you to play from that long anyway.

well they game move a 9.0 so i guess we gotta see some more reviews before people argue about wich is better.

true, so cvg thinks move is better than kinect too

Good score. I might have to pick this up once child of eden releases.

sony didn't even pay half that to advertise move.
thats why the first 500000 they make on kinect wont even be profit.

until you actually have proof of pay offs, shut up. as toolish as some fanboys are at least they let good scores on competing systems stand, it's not constant accusations of payola and shenanigans.

I said a few eeeks ago on this site,

You obviously do not know anything about Microsoft. Microsoft is KNOWN to use underhand business tactics if it means they can get a foothold and/or monopolize a market.

From paying out the media to standard organizations, Microsoft have employed underhand business tactics time and time again.

Read up on SCO's case against Linux. It stemmed from Microsoft having dealings with SCO to spread false information about Linux to slow its adoption.

Read up on Microsoft buying out the ISO in order to pass a vastly inferior document standard in order to stranglehold their Office monopoly.

Microsoft is known to deceive consumers if they can profit from it:

- Microsoft pays big names in order to pass their "controller-free" gaming as new and innovative -- But the functionality is no different than the Eye-Toy.

- Microsoft is tricking consumers to believe that "gesture navigation" to interfaces is the next big thing -- But "gestures" is one of the worse interface input one can conceive and Microsoft knows this.

- Microsoft is tricking gamers into believing the Star Wars demo is real -- But in reality, the game won't even be close to what they show. Microsoft knows that Kinect will NEVER be accurate enough for anything other than very simple games with very forgiving gameplay due to Kinect will NEVER be 100% accurate. Think about it: If the brightest minds can't even solve voice-to-text, due to the variations of human voice alone, what makes you think that a company that can't even make a secure internet browser can solve image-recognition with infinitely many variations of body shapes and sizes and infinitely many variations in movements?

As someone who has been working with technology for over 15 years, Microsoft's product marketing are based on lies and deception. If you are a consumer, you SHOULD NOT be supporting Microsoft.

I was joking about the pay-offs. Besides, we all know Micro$oft would NEVER, EVER, NEVER consider a shameless thing like that to make Kinect sell more, right?

you live in the UK. Or at least 90% of the UK. How many average terraced houses in UK have living rooms with enough space for even the single player 6 feet of space before having to turf up mums coffee table or jump around on the sofa?

I also like the way he glossed over the three days of "training" in different lighting before Kinect was even useable. The average Joe will not accept that. If it doesn't work in the first 5 minutes patience will be lost. Its a tech toy aimed at the casuals, but needs a hard core gamer to have "patience" with the extreme calibration rituals. Compare this to Move which takes seconds to calibrate and your off. or even the old eye toy, that was just plug and play straight out the box.

That was a long winded article can't believe I read most of that...

I knew it will happen!

Ps3 fan wanted reviews but just if they are bad for kinect because if they are good Microsoft 500millions. I just confirm that you don't act like a child.....you are a child.

500M is the new perfect score.

Maybe its good as they say how know.overall most of the
reviews were positive so far.for a an accessory that makes you
tired in 10 min. there is something fishy around here.

No just no. Opinion and personal taste win. Fool.

duck off! you don't like kinect, big deal, get over it.

Agree 2Disagree 2
▼✖-+
SPAMInappropriate
Show all comments (32)
The story is too old to be commented.
20°

Joy Ride Turbo - The Beginning of the End for Xbox Kinect

All the money in the world couldn’t make Kinect happen

Is Xbox One Kinect still worth buying in 2019?

Epic tells Fortnite players on Xbox One to unplug their Kinect