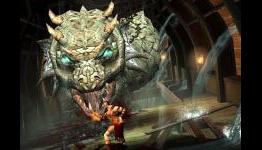 Every Kratos Kill Ever: God of War 1

Before the first God of War game was released, most people had a pretty clear idea of Greek mythology and the history of the ancient myths. Maybe we learned it from our first-year class in college, maybe we got all we needed to know watching Disney’s Hercules or the lesbian adventure Xena: Warrior Princess. Regardless, the mythology seemed set in stone (and probably was in the case of many stories), and to go and change it on us this late in the game seems ridiculous. However, that’s exactly what Santa Monica Studios did with the invention of Kratos, gaming’s most beloved serial killer and the slayer of all we know about Greek mythology. With the release of God of War: Ghost of Sparta, Spawn Kill thought it might be handy as a quick reference guide to take a look back at the God of War series and remember just how much of Greek mythology Kratos has butchered.

Adhttps://www.youtube.com/watch?v=EjfojxXOobE&t=463s
- Comments (10)+ Comments (10)
TopNewestOldest
Expand all
The story is too old to be commented.

So he starts off slow... Just wait till we get to God of War 3. Awesome primer for Ghost of Sparta!

Ares was a hardass.

i agree! he's too much of a badass for it to get old

I cannot open the link to the website. It says i cannot connect to spawnkill
Edit: Nvm it works now
Good Read!

But seriously why not get links for every type of kill. Youtube would for sure have footage of each one.

Because I'm a terrible person. :(

The Ares fight still has the best dialogue ever.
"That night... I was trying to make you a great warrior."
"You succeeded!" *impale*
*explode*

Ares: I have taught you many ways to kill a mortal, Kratos.
Flesh that burns, bones that break, but to brake a man's
spirit, is to trutly destroy him!

Great and interesting article. I've always enjoyed watching Kratos do what he does best. And no, I'm not talking about the sex mini-games.

God of War Is Great On PC, But PlayStation Is More Reliable

God of War hotfix takes aim at 'out of memory' errors

When will video games give me their sad murder mums?

God of War's PC Modders Are Already Churning Out Nightmares